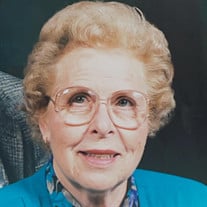 Anita Rae Graham Lynch was called home to be with The Lord on July 7, 2021. Anita was born on May 11, 1927, the third child of Otho Raymond “Ray” and Polly Ann Danford Graham. Anita grew up with three brothers in the community of Accident. Her dad operated a family farm and orchard while also working for the Arkansas state highway department. Anita loved to tell stories about growing up on the farm, walking to school in Accident, carrying a freshly baked sweet potato or a fried apple pie to school for lunch, walking by herself to visit her grandmother Graham, or getting a new pair of white dress shoes for $3 for Easter. She said she was thankful to have grown up in an area where she could climb a tree and pick an apple or peach to enjoy from an orchard tree. In 1945 Anita graduated from Rogers high school. After graduation she attended Fayetteville business college and worked five years for Late Chevrolet as the bookkeeper. In February, 1950, Anita married Dale Lorne Lynch, a WWII veteran and farmer, in a double wedding ceremony with Jessie & Lorene Morris. The Lynches operated a dairy farm in Tontitown for several years before switching to raising poultry and cattle. Anita worked diligently on the farm, assisting Dale with the chickens and cattle, maintaining the business financial records, and also canning vegetables from the home garden. She was an excellent cook; her handmade pie crusts and cobblers were among the best. If there were any extra time, it was to be spent with extended family. She and Dale provided a very stable home for their son and daughter, Charley and Miriam. As a member of Brush Creek Baptist Church, she served as the treasurer for many years and attended faithfully until her health would no longer allow. Anita is survived by son: Charley (Dean) Lynch of Calvert City, KY; daughter Miriam (Stan) Harness of Rogers, AR; grandchildren; Brandon (Cris) Harness; Emily (Daniel) Young; Kendall Lynch; Kyle (Erica) Lynch; Chas (Sara) Lynch; ten great grandchildren and two great-great grandchildren; nephews, Jerry (Bonnie) Graham; Ed (Amy) Graham; nieces, Connie Graham Watt; and Diana (Hank) Graham-Fontecilla and several grand nieces and nephews. Anita was preceded in death by her husband of 46 years, her parents, her three brothers: Kenneth (Irene), Lyle, and James (Virginia) Graham; nephews James Graham and Phillip Graham; her maternal grandparents Laura Belle Dill Danford and Daniel Boone Danford; her paternal grandparents Sarah Ellen Graham and James Jefferson Graham. Anita loved The Lord, her family, her church. Her favorite Bible verse was: “If My people who are called by My name humble themselves, and pray and seek My face and turn from their wicked ways, then I will hear from heaven and will forgive their sins and will heal their land.” 2 Chronicles 7:14. Funeral services will be Saturday, July 10, 2021 at 2pm at Sisco Funeral Chapel of Springdale with Pastor Terry Eaton officiating. Burial will follow in Elm Springs Cemetery. Visitation will be from 1 to 2pm at the funeral home on Saturday. Online condolences may be left at www.siscofuneral.com

Anita Rae Graham Lynch was called home to be with The Lord on July 7, 2021. Anita was born on May 11, 1927, the third child of Otho Raymond &#8220;Ray&#8221; and Polly Ann Danford Graham. Anita grew up with three brothers in the community... View Obituary & Service Information

The family of Anita Rae Lynch created this Life Tributes page to make it easy to share your memories.

Anita Rae Graham Lynch was called home to be with The Lord on...

Send flowers to the Lynch family.