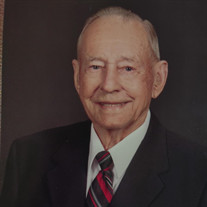 At age 94, Billy Bennett, Sr. departed this life on November 13, 2020. He was born in the family farmhouse in Newport, Arkansas on October 22, 1926 to Harrison Thomas Bennett and Ima Miller Bennett. His parents had five children in all: Mary Ethel “Tommie” Bennett Walker, then came Billy, followed by Benny Harrison Bennett, Harrison Bennett, Jr. and Lonnie Joe Bennett. All preceded him in death. Billy came by his hard working, entrepreneurial ethics honestly, his dad a farmer, John Deer dealer, and general store owner. Billy created his first job as a young boy on the steps of his father’s John Deer dealership selling Coca-colas. “This was during the depression, now,” said Billy earlier this year. “…and my dad would give me an allowance of .25 cents a week, which he thought was too much. I used it to start selling cokes to people, so Dad took me to the soda dealer in town, and we struck a deal. I got a case of Cokes for .80 cents. So, when I sold ‘em for .5 cents each, I’d make a .40-cent profit. But I had to bring the bottles back, so I kept an eye on making sure people got ‘em returned.” During the summer before his senior year of high school, Billy’s dad helped him obtain a loan to work in San Francisco building ships. “They paid us well, and while we built our ships, we got to watch them build the Golden Gate Bridge which some had said couldn’t be done.” Billy was offered a job at the end of the summer with the ship builders. He turned it down to come home and graduate high school. He went on to the University of Arkansas, joining Sigma Chi fraternity and continuing to date his high school sweetheart, Martha. He wasn’t there long when the Army drafted him to the Philippines in 1944 where it was discovered he had played trombone in the high school band. He auditioned and was accepted into the 6th Infantry Division Band. One month later he was promoted from Private First Class to Staff Sergeant and commissioned to lead the band across Korea. Again, offered a permanent position, Billy declined and came home to marry his sweetheart, Martha Ann Neighbors. They married April 29, 1951. Thanks to Martha’s hard work as Chief Secretary for AAA in Newport, between two of them, they were able to purchase their first home on the G.I. Loan Program, and began farming. They had three sons together: Billy Bennett, Jr., Charles Bennett and David Bennett. Martha passed away on Billy’s birthday in 2001. He never remarried and is most likely now holding hands with her in heaven as he did on earth. Billy is survived by his grandchildren: Charles Bennett, Jr., Nichole Harms, Amanda Bennett Case, Jonathan Bennett, Charity Bennett Jones, Chad Bennett, Blake Bennett, Steffanie Bennett, and Kimm Bennett. He is preceded in death by his granddaughter Jennifer Bennett. Billy is also survived by thirteen great grandchildren, and one great great grandchild. Billy and Martha invested in rice for the family farm, which they grew successfully. In their fifth year of farming they infamously planted rice by throwing it out of an airplane during an area-wide flood, giving the family one of the best crops of rice ever grown. After several years of successfully running the farm, the couple moved to Florida where Billy ran a successful career as a mortgage broker and real estate agent while still managing the Newport farm. They came back to Arkansas, settling in the Springdale area, where he continued to instill the Bennett family with his Christian values and his love of Razorback football. Billy served as Deacon and as Superintendent of Sunday School at First Baptist Church of Newport. He had most currently been a member of Fellowship Bible Church in Rogers, Arkansas. Billy never lost his drive to serve others, “…as the Lord so graciously has served me.” In lieu of flowers, the family requests donations sent to the Salvation Army in Fayetteville, Arkansas. They can be found online at: http://salvationarmyaok.org/nwarkansas/donate/ Masks are required for all services honoring Billy Bennett, Sr.,. On Tuesday, Nov 17, visitation will be limited to at-risk friends and family from 12-2pm. Funeral Services will be held Tuesday, Nov 17 at 2pm. at Sisco Funeral Chapel. Graveside service will be Wednesday, Nov 18 at 2pm at Walnut Grove Cemetery in Newport Arkansas. Again, masks are required for all services. Online condolences may be left at www.siscofuneral.com

At age 94, Billy Bennett, Sr. departed this life on November 13, 2020. He was born in the family farmhouse in Newport, Arkansas on October 22, 1926 to Harrison Thomas Bennett and Ima Miller Bennett. His parents had five children in... View Obituary & Service Information

The family of Billy Eugene Bennett Sr. created this Life Tributes page to make it easy to share your memories.

At age 94, Billy Bennett, Sr. departed this life on November...

Send flowers to the Bennett family.