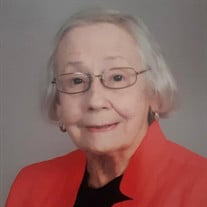 Blanche Ferguson Coker departed this life to meet her Savior on September 27, 2021. Born at home on the family farm west of Booneville, AR, on March 11, 1927, she was preceded in death by her parents, William Alonzo Ferguson and Clara Elizabeth Dickey, two brothers, Edward (Shirley) and John (Reece), one sister, Katherine (Jack) Bentley, one brother-in-law, M. R. South, and one son-in-law, the Reverend Gaylan Cope. She is survived by a son, William Coker (Karin), a daughter, Suzanne Cope, five grandchildren, David (Wendy) and Christopher (Tara) Sims, and Daniel, Paul, and Amanda Coker, five great-grandchildren, Tucker and Brylie Sims, and John David, Kathryn, and James Coker, one sister-in-law, Betty South, four nieces, two nephews, and many friends. Blanche was educated by her parents (both teachers) and the Booneville Public Schools. She went to summer school to graduate a year early in 1944 and was named salutatorian of her class. She had dreams of being a nurse, but was refused admission due to a crippled leg, caused by a childhood bout with polio. In 1945, Blanche renewed her acquaintance with a former classmate, Foy Coker, who was preparing to ship out to Japan. They wrote to each other for the year he was gone, and when he returned, they made plans for a wedding the next spring. The vows they made on March 16, 1947, were to last over 62 years, until Foy’s passing in 2009. By Christmas, Blanche and Foy were celebrating a surprise--the birth of their first child, William Foy. The next five years found the young family traveling across the country with the U. S. Army from Olympia, WA, to Tombstone, AZ, then back to AR, where they finally settled in Fort Smith. Soon after, they were blessed with a baby girl, Suzanne. For the next six years, Blanche showed her skills as a housewife and mother. In 1959, Foy was offered the office manager’s position with George’s Feed and Supply in Springdale. In June, they made the move. For the next six decades, Blanche became immersed in her new city. She held leadership positions in PTA, Girl Scouts, United Methodist Church, PEO, Beta Sigma Phi, and Book Lovers Book Club. She made many new friends, including the Breakfast Beauties, the Bridge Club, Dinner Party Group, and Small Group Bible Studies. In 1970, she and Lena Collins opened C & C Gifts in San Jose Manor, which was later expanded to include a second store in Siloam Springs. The store had a 30-year run on Emma Avenue as the place to shop for “Gifts of Distinction.” She finally closed the shop to take care of Foy as he experienced declining health. She took excellent care of him for the next eleven years. Throughout the years she continued to make family a high priority, hosting holiday parties and giving support to anyone who was hurting or giving birth or needing some help with the grandkids. She was a consummate cook, a marvelous gardener (both flowers and vegetables), a faithful friend, and a great listener. She and Foy were avid sports fans and for many years held season tickets for football and basketball for the Razorbacks and the Bulldogs. Even in the last years of her life when memory issues became a problem she continued to make new friends among the residents and staff at Providence Assisted Living. Her kindness, cheerfulness, and winsome manner will remain in our hearts. Visitation will be at Sisco Funeral Chapel, 705 West Meadow Avenue, from 5:00-7:00 p.m., Friday, October 1. A service celebrating Blanche’s life will be Saturday morning at 10:00 a.m. at First United Methodist Church, 206 West Johnson Avenue, Springdale, AR. A graveside service will be held at Ferguson Valley Cemetery west of Booneville, AR, at 3:00 p.m. Pallbearers are David Sims, Paul Coker, Christopher Sims, Fred Bentley, John Ferguson, Ronnie Elmore. Honorary Pallbearers are Daniel Coker, Bernie Nelson, Jerry Dickens, Ferrell Dickens, and Builders Sunday School Class. Memorial gifts can be made to First United Methodist Church, Springdale.

Blanche Ferguson Coker departed this life to meet her Savior on September 27, 2021. Born at home on the family farm west of Booneville, AR, on March 11, 1927, she was preceded in death by her parents, William Alonzo Ferguson and Clara Elizabeth... View Obituary & Service Information

The family of Blanche Ferguson Coker created this Life Tributes page to make it easy to share your memories.

Blanche Ferguson Coker departed this life to meet her Savior...

Send flowers to the Coker family.