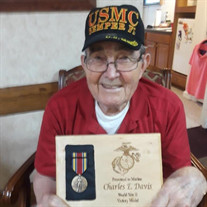 Charles E. “Charlie” Davis, a resident of Springdale, Arkansas, passed away on November 5, 2021, at the age of 93. Charlie was born on February 13, 1928, in Dewitt, Arkansas, one of eight children of Frank M. and Paluna Marie (White) Davis. Charlie grew up over in the “east bottoms,” as he called it, where he learned to hunt and fish to help put food on the table. His love of hunting and fishing, and the outdoors in general, endured throughout his lifetime. Following high school, Charlie proudly served his country in the United States Marine Corps. Following the Marine Corps, Charlie attended college and law school in Fayetteville, often hitchhiking from Fayetteville back to the east bottoms to visit family and friends. After graduating from law school, Charlie worked as a Special Agent for the FBI under then Director J. Edgar Hoover, after which he moved to Springdale, Arkansas, and opened his law practice. In 1954, Charlie married Betty Jo (Lane) Davis, and to this union were born two daughters, Anita Marie Davis and Lane Davis. Betty Jo was often heard to say that she knew it was going to be a long marriage when she found Charlie skinning a deer in their shower. Charlie practiced law in Springdale for well over 50 years, during which time he also served as Springdale Mayor, a Workers Compensation Judge, and State Representative. Charlie was, and will always be, a legend among his fellow lawyers, friends, and clients. He was a mentor to many law students and young lawyers who went on to pursue successful careers in the law. He was a fearless fighter for his clients and a compassionate friend to those in need. He was “old school,” and his word was his bond. Charlie is survived by his daughter, Lane, of Dallas, Texas; two sisters, Ruth Ann Woods and Margie Hess; two sisters-in-law, Polly Davis and Lois Davis; and a host of nieces and nephews. He was preceded in death by his parents, Betty Jo Davis, daughter Anita, brothers Fred Davis, Arthur “Shorty” Davis, Frank Davis and Walter Davis, and one sister, Freda Durham. A memorial service will be held at a later date under the direction of Sisco Funeral Chapel. In lieu of flowers donations may be made to Elite Hospice, 4847 Kaylee Ave Suite A, Springdale, AR 72762. Online condolences may be sent to www.siscofuneral.com .

The family of Charles E. "Charlie" Davis created this Life Tributes page to make it easy to share your memories.

Send flowers to the Davis family.