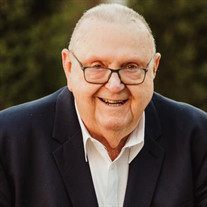 Charles C. “Charley” Farmer, 88 of Springdale went to be with the Lord on Thursday, December 16, 2021 in Springdale. He was born March 13, 1933 in Mayflower, Arkansas to Charles Oren and Flossie Belle Cooper Farmer. Charley was raised in Clarksville, Arkansas and moved to Springdale after he graduated mortuary school where he began his career at Sisco Funeral Chapel and later became the owner and operator. He served in the United States Army during the Korean War. He was a member of Elmdale Baptist Church. He served on many boards and committees including Springdale Memorial Hospital, First State Bank, Springdale Industrial Commission, he was a Paul Harris Fellow and a former member of the Springdale Rotary Club. He served as a past President of the Springdale Chamber of Commerce. He had many hobbies, including hunting, fishing and he was an avid Amateur Radio Operator holding the call sign WA5NUO. He was an avid supporter of the 2nd Amendment, he was a lifetime member of the NRA and was a member of several shooting clubs and he was a Concealed Carry Firearms Instructor. He was preceded in death by his wife, Edith Louise Farmer; two grandchildren, Elizabeth Louise Reed and David Michael Farmer. Survivors include two sons, Rex David Farmer of Springdale and Charles D. Farmer and wife Amanda of Springdale; one daughter, Debbie Louise Reed and husband Tim of Sonora; two sisters, Rose Farmer Stephens of Spring,Texas and Sue Farmer Hansen and husband Dwaine of Richardson, Texas; eight grandchildren and three great-grandchildren. Funeral services will be Wednesday, December 22, 2021 at 11:00 a.m. at Elmdale Baptist Church with Pastor Billy Chidister and Pastor Bryan Graham officiating. Burial will follow in Friendship Cemetery. Visitation will be Tuesday, December 21, 2021 from 5 to 7pm at Sisco Funeral Chapel of Springdale. Online condolences may be left at www.siscofuneral.com

Charles C. &#8220;Charley&#8221; Farmer, 88 of Springdale went to be with the Lord on Thursday, December 16, 2021 in Springdale. He was born March 13, 1933 in Mayflower, Arkansas to Charles Oren and Flossie Belle Cooper Farmer. Charley was... View Obituary & Service Information

The family of Charles C. Farmer created this Life Tributes page to make it easy to share your memories.

Charles C. “Charley” Farmer, 88 of Springdale went to be with...

Send flowers to the Farmer family.