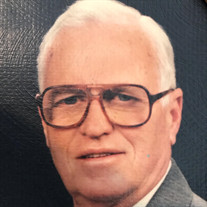 Charles Edward Jones of Fayetteville, Arkansas passed away on Wednesday, February 3, 2022 at the age of 93. He was born in Oklahoma City on June 10, 1928, the son of Edward and Stella Jones who preceded him in death, along with his beloved wife, Elaine. Charles is survived by his brother Glen, and 5 sons Kenneth, David, Doug, Roger and Scott along with many grandchildren and great grandchildren. Charles loved two things in life more than most: football, and the love of his life, Elaine. The two were married on June 12, 1949 in Springdale, Arkansas where they both attended high school. Charles joined the United States Army serving in the 82nd Airborne Division and was discharged on January 21, 1948. He attended the University of Arkansas receiving both his Bachelors and Masters Degrees of Science in Physics. He later attended Texas A&M University where he completed his PhD in physics. Charles was a professor of physics at the University of Arkansas for 10 years prior to accepting the Chair of Physics at Texas A&M Commerce in 1970 where he served for 22 years. He established new course offerings in astronomy, energy conservation and material surface science. He was a past president of the Texas Section of the Association of Physics Teachers, he was listed in the Who's Who in American Universities, an honorary member of Phi Beta Kappa, the leader in the Society of Physics Students, and a member of the Springdale Sports Hall of Fame. He was a talented woodworker and home builder, building his last house, a cabin in the Ozarks, with his sons in 2000. Charles and Elaine were both active in church and community activities with Elaine helping establish Christian based schools in both Springdale, AR and Greenville, Tx. Education was their passion, many others were affected by this passion. Visitation will be from 5-7 pm on Monday, February 7, at Sisco Funeral Chapel in Springdale. Funeral services will begin at 10:00 am with a last viewing prior to the 11:00 am service at Salem Lutheran Church in Springdale. Donations are preferred to the Charles and Elaine Jones Scholarship Fund at Texas A&M Commerce or the General Scholarship Fund at the University of Arkansas. To place an online tribute, please visit: www.siscofuneral.com.

Charles Edward Jones of Fayetteville, Arkansas passed away on Wednesday, February 3, 2022 at the age of 93. He was born in Oklahoma City on June 10, 1928, the son of Edward and Stella Jones who preceded him in death, along with his beloved... View Obituary & Service Information

The family of Charles Edward Jones created this Life Tributes page to make it easy to share your memories.

Charles Edward Jones of Fayetteville, Arkansas passed away on...

Send flowers to the Jones family.