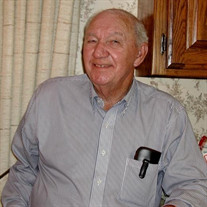 Charles L. Porter, 89 of Springdale passed away Wednesday, August 7, 2019 at Willard Walker Hospice House in Fayetteville. He was born April 14, 1930 in Boston, Arkansas to Beecher and Tressie Lane Porter. Charles (Les) was a truck driver for the state of California and served in the United States Army during the Korean War. He loved playing golf, flying and coaching his kids and grandkids in sports. He was a Godly man who loved the Lord as well as being a loving husband, father and grandfather. He was preceded in death by his parents, two sisters and three brothers. Survivors include his wife of 65 years, Jo Ann Porter of the home; one son, Dale Porter of Springdale; one daughter, Pamala Porter of Springdale; two brothers, Beecher Lee Porter of Little Rock and Leon Porter of California; three grandchildren, Shanna, Sam and Brad, five great grandchildren, Preston, Charlotte, Bonnie, Sophie, Chloe and one great-great grandchild, Finn. Funeral services will be Friday, August 16, 2019 at 12:00 p.m. at Sisco Funeral Chapel of Springdale. Burial will follow in Fayetteville National Cemetery with military honors. Visitation will begin at 11am on Friday at the funeral home. Online condolences may be left at www.siscofuneral.com

The family of Charles L. Porter created this Life Tributes page to make it easy to share your memories.

Send flowers to the Porter family.