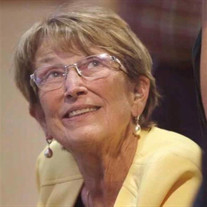 Cheryl K. Maples, 69 of Heber Springs passed away Thursday, August 22, 2019 in Little Rock, Arkansas. She was born March 2, 1950 in Santa Monica, California to Harvey and Patricia Ware Smith. Cheryl lived in Pacific Palisades, Calif. until 1962 when she then moved to Springdale eventually moving to Springbrook Farm in Fayetteville. She graduated from Fayetteville High School in 1968, and married the love of her life Richard on that same day. She entered college when she was 30 and graduated seven years later from UALR with a law degree. She was the first Truman Scholar to stay in Arkansas for her college education. She was a nationally recognized civil rights advocate known for her work with the poor and disadvantaged. Her family was the most important thing in her life. She was preceded in death by her parents. Survivors include her husband, Richard Maples of the home; two sons, Gregory Smith of Fayetteville, Ark. and Darin Monroe of Boise, ID; three daughters, Monica Keesee and husband Randy of Benton, Ark., Melina Granger of Sherwood, Ark and Meredith Moore and husband Steve of North Little Rock, Ark; one brother, Harvey Smith and wife Amy of Fayetteville, Ark; two sisters, Linda Smith of Fayetteville, Ark. and Cindy Starr and husband David of Cedaredge, Colo; twelve grandchildren and two great grandchildren. Graveside services will be Wednesday, August 28, 2019 at 11 A.M at Bluff Cemetery in Springdale. Visitation will be Tuesday from 6 to 8pm at Sisco Funeral Chapel in Springdale. A memorial service will be held Saturday, September 7, 2019 at 4 P.M. at New Beginnings Church in North Little Rock, Ark. A candlelight vigil will follow at 8 P.M. at the Arkansas State Capitol Grounds. Online condolences may be left at www.siscofuneral.com

The family of Cheryl K. Maples created this Life Tributes page to make it easy to share your memories.

Send flowers to the Maples family.