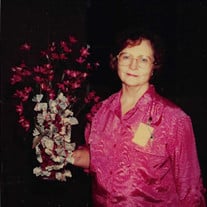 Cliffie Lee Curtis 95, was born to Parents Lee Elbert and Martha Alice (Kisor) Watkins on October 21, 1925 in Springdale Washington County, Arkansas. Cliffie married Mr. Calvin Leonard Curtis and lived a wonderful life raising their children between the states of Arkansas, California and finally settling in Texas. She was employed at TI in Sherman, Tx for many years until her retirement. Cliffie loved watching old westerns and wrestling. You could not tell her those body slams were fake. She spent her retirement in the kitchen cooking with all of her grandchildren. We all loved her gumdrop cookies and her famous cranberry sauce. Cliffie is preceded in death by her husband Calvin, three sons; Michael Dean Sr., David Lee, and Reginald Eugene Curtis. She is survived by her daughter Marilyn Kaye Curtis-Wood of Denison, Tx, son Michael Dean Jr, and wife Judy of Denison. Grandchildren, Deanna Britton, Stephen Stewart, Tamera Plemmons, Bryan J Curtis, John Stewart, Tresa Curtis, Shelly Evans, Dennis Wood, Justin Shelton, and Michael Dean Curtis 3. 17 great-grandchildren and 1 great great-grandchild. Graveside Services will be held Friday March, 19 at 11:00 am Shady Grove Cemetery in Springdale Arkansas. Sisco Funeral Chapel is in charge of services. We would like to thank Denison Nursing and Rehabilitation in Denison for the Love and Care they have shown Cliffie the last few years, Fisher Funeral Home for caring for her and transporting her safely back to Arkansas, and everyone else for your love and support through this very difficult time. Online condolences may be left at www.siscofuneral.com

The family of Cliffie Lee Curtis created this Life Tributes page to make it easy to share your memories.

Send flowers to the Curtis family.