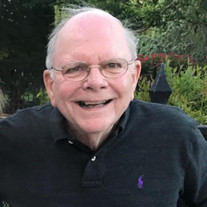 Dan Lewis, longtime Springdale resident, passed February 2 at the age of 80. Dan was born in Weed, California, and grew up in DeRidder, Louisiana. His parents, Genevieve and Albert, worked in their retail store, the Standard Mercantile Co. Dan lettered in high school football, basketball and track. A story he shared of when he and two teammates went to steal a watermelon from old man Shirley’s field. Mr. Shirley was waiting and shot his shotgun in the air upon their arrival. They ran! Mr. Shirley later brought them each a melon with their names scratched on the side. Dan spent high school summers working long hours for the Rural Electric Association through dramatic weather conditions. Dan's family was active in the First Methodist Church community. Dan was an Eagle Scout; a highlight was traveling by train to attend the National Boy Scout Convention. Dan attended Louisiana State University, LSU, and joined Sigma Chi Fraternity making lifelong friendships. Dan earned a B.S. and a Masters of Education from LSU, completed an Administrative Intern Program at Tulane and received his Ed.D. from the University of Southern Mississippi. After LSU graduation, Dan married his college sweetheart, Dolores. He then served as a teacher, coach, athletic director, administrative intern, and assistant principal in St. Bernard Parish, LA. While there, he and a friend built a fishing camp on Lake Bourgne that you could only reach by boat. Dan served the Louisiana Department of Education for 25 years. As Director of the Bureau of Experimental Programs he managed federal education money, traveled statewide to school districts, and attended US Department of Education conferences. Dan and Dolores retired to Springdale to be near their daughter, Leigh, son Dan, Jr. and grandchildren. Summer beach trips, and weekends playing at their grandparents home on Beaver Lake are the grandchildren's most cherished memories. Dan and Dolores became active in the First United Methodist Church, and Dan accepted leadership roles in the Bread of Life ministry, and served on the Board of Directors for the NW AR Food Bank. Wood working was a lifelong hobby of Dan’s. He built a workshop at every home and his tool collection was extensive. Many of his friends urged him to sell his products, but he preferred to gift them. Cooking and grilling were other hobbies - his barbecue sauce was legendary. Grilled chicken, jambalaya, shrimp etouffee, and crayfish boils were crowd favorites. Dan is survived by his wife Dolores of 58 years, daughter Leigh Lewis Verucchi, son-in-law David Verucchi, three grandchildren Evan, Nicholas and Gabrielle Verucchi. Son Daniel Keith Lewis, Jr., daughter-in-law Krista, three grandchildren Eliza, Eleanor and Noel Lewis, as well as his sister, Kay Lewis Jones. Memorial contributions may be given in his memory: First United Methodist Church Bread of Life Ministry Circle of Life Hospice in Springdale Online condolences may be left at www.siscofuneral.com

Dan Lewis, longtime Springdale resident, passed February 2 at the age of 80. Dan was born in Weed, California, and grew up in DeRidder, Louisiana. His parents, Genevieve and Albert, worked in their retail store, the Standard Mercantile Co. Dan... View Obituary & Service Information

The family of Dan Lewis created this Life Tributes page to make it easy to share your memories.

Send flowers to the Lewis family.