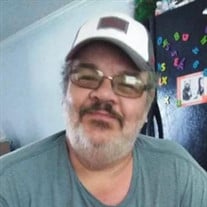 David Gerald Lint, Jr., 54 of Westville, Oklahoma passed away Friday, September 24, 2021 at Northwest Medical Center in Bentonville. He was born August 18, 1967 in Fayetteville, Arkansas to David Gerald Lint, Sr. and Josephine Deanna Corbin Lint. David worked at Jim’s Razorback Pizza in Fayetteville and he was a newspaper carrier for the Arkansas Democrat Gazette for 13 years. He served in the United States Army and the Arkansas National Guard and was honorably discharged. His favorite sports teams were the Arkansas Razorbacks, New York Jets, the Los Angeles Dodgers and he loved any types of food challenges and he liked classic rock music. His favorite holidays were Halloween and Christmas. His favorite color was solid black, he was a gentle giant with a big heart. He was preceded in death by his parents, one brother, Mark Lint and one nephew, Michael Turner. Survivors include his wife, Peggy Lint of the home; three step daughters, Vanessa Finnegan, Ashley Finnegan and Destiny Lester; one step son, Trenton Finnegan; 8 grandchildren, Nevaeh Finnegan, Braden Crittenden, Logan Crittenden, Xander Littrell, James Littrell, Lillie Littrell, Aubree Hornback, Waylon Hornback and one sister, Debra Riley and one brother, Kevin Lint. No services are planned at this time. Online condolences may be left at www.siscofuneral.com .

The family of David Gerald Lint Jr. created this Life Tributes page to make it easy to share your memories.

Send flowers to the Lint family.