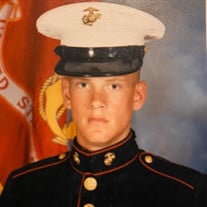 David Jay Smith, 53, of Fayetteville, Arkansas passed away on Friday, May 7, 2021. He was born August 28, 1967 in Fayetteville, Arkansas to late Randall Glen Smith of Tulsa, Oklahoma and Helen Rose Smith of Springdale, Arkansas. He was a graduate of 1985 of Guthrie High School in Guthrie, Oklahoma. David was a veteran of the US Marine Corps where served with honors from 1985 - 1989. He served as a law enforcement officer in Benton and Washington Counties for several years. He attended Northwest Technical Institute, where he was elected the National Vocational Technical Honor Society in 2002 and graduated in 2003. He worked as an Information Technology Consultant from 2001 to 2021. David enjoyed fishing, hunting, and playing chess with his friend John Maness at The Arkansas Chess Association (ACA). He is survived by his mother, Helen Rose Smith of Springdale; grandmother, Eunice Griffin of Guthrie, Oklahoma; three brothers, Kenneth Glen of Theodosia, Missouri, Randall Keith of Springdale, and Douglas Griffin (Paula) of Solgoachia, Arkansas; four nieces, Loren (Kevin) Cluck of Alma, Arkansas, Morgan Smith of Morrillton, Amanda and Amber Smith of Lincoln, Arkansas, one nephew: Hayden (Destinee)Smith of Conway, Arkansas; one great niece and five great nephews. He is preceded in death by his father, Randall Glen Smith of Tulsa, Oklahoma; paternal grandparents Glen and Evelyn Smith of Fayetteville, AR, and maternal grandfather Kenneth Griffin of Guthrie, Oklahoma. Memorial services will be held on Friday, June 4, 2021 at 1:30 PM at the Fayetteville National Cemetery.

The family of David Jay Smith created this Life Tributes page to make it easy to share your memories.

David Jay Smith, 53, of Fayetteville, Arkansas passed away on...

Send flowers to the Smith family.