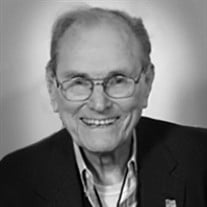 David Eugene “Gene” Sprouse, 94, passed away after a brief battle with cancer on Monday, July 27, 2020. Gene was born on August 28, 1925, in Fort Smith, AR, to Louis Taylor and Darthula Sprouse. He was the eighth of nine children. He is a 1943 graduate of Fort Smith High School. In March 1946, he married his high school sweetheart, LeVurn Reynolds Sprouse. In 1943, Gene was sworn in the United States Navy. During WWII, he served in the Pacific Theatre aboard the destroyer U.S.S. Harold C. Thomas and the aircraft carrier U.S.S. Belleau Wood. He served in the Korean War until he was honorably discharged in 1952. Gene’s trade was furniture manufacturing. He worked as a Plant Manager for Eoff Manufacturing in Fayetteville, AR, and Whillock Manufacturing in Springdale, AR. In 1983, Gene co-founded Sprouse Upholstery in Springdale where he worked until “retirement” at age 90. He was preceded in death by his beloved wife, his eldest son, David Sprouse, and three dear sons-in-law (Willis Herndon, Denny Stringer and Mark Courdin). Gene is survived by his daughter, Gina Stringer Herndon, his son, Doug Sprouse (Sandy), and his daughter, Retta Courdin. He is also survived by his brother, Montie Jo Sprouse, of Broken Arrow, OK. Additionally, he is survived by thirteen grandchildren, nineteen great-grandchildren and one great-great grandson. Gene’s family was his greatest joy. His family will remember his exemplary humility, integrity, strength, honesty, faith and kind spirit. He did small things with great love. Gene enjoyed golfing, gardening, hunting, fishing, playing cards and watching sports. His storytelling, jokes and one-liners were unmatched. He will be missed. A graveside memorial service will be at Bluff Cemetery (900 N. Shiloh St., Springdale) on Sunday, August 2, 2020, at 2 pm. The service will be officiated by Rev. Charlie Foster. Memorial contributions may be made to Arkansas Veterans Village or Circle of Life Hospice. Online condolences may be left at www.siscofuneral.com

The family of David Eugene "Gene" Sprouse created this Life Tributes page to make it easy to share your memories.

David Eugene “Gene” Sprouse, 94, passed away after a brief battle...

Send flowers to the Sprouse family.