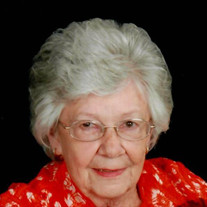 Donna Gail Schreier Morris passed away peacefully at Washington Regional Medical Center on March 16, 2019. She was born to Esther Howard Schreier and William Lawrence Schreier of Fort Smith, Arkansas in 1937. An only child, Donna grew up in Fort Smith surrounded by a close group of extended family and friends centered around Bernie Avenue and the Calvary Baptist Church on Midland Boulevard. While finishing an associate's degree at the Fort Smith community college she met her future husband John Morris, who was also an only child. They married in 1957, and together they attended the University of Arkansas in Fayetteville. John earned a BS in civil engineering, and Donna got her “PHT" (putting hubby through) degree. Soon their daughter Kathie arrived followed by son Curtis a bit later. John's engineering career took the family to various posts in Oklahoma and Virginia. Donna maintained the home and raised the kids, often single-handed as John's federal government job demanded frequent travel. That all changed in 1977, when John and Donna bought an auto parts store in Springdale. This brought the Morris clan back to Arkansas and closer to family. It also meant working seven long days a week as the couple struggled to operate and grow Morris Auto Supply. The family business became part of a thriving street-rodding scene in 1980s Springdale. As a result, John and Donna became heavily involved in the Rollin' Relics car club, and many life-long friendships were forged during that time. Throughout her tenure at the family business, Donna became a "serial care giver," taking several aging family members into her home when they could no longer live independently. She lovingly cared for her father in law, then her mother, and finally John's aunt and uncle. After the sale of Morris Auto Supply in 1995, she and John worked for a time as NRA certified concealed carry permit instructors. An inherited motor home inspired a craving for travel, and to subsidize that urge, John and Donna both worked for a time at McGaugh RV. After John's passing in 2005, Donna devoted most of her time to caring for her daughter Kathie, who after batting multiple illnesses required much care. Donna had a long association with the First United Methodist Church of Springdale, volunteering at the Bread of Life among other activities. She enjoyed reconnecting with old friends from her early days in Fort Smith, Oklahoma and Virginia. She particularly enjoyed spending time with her granddaughters, whom she doted upon at every opportunity. Donna is survived by her daughter Kathie, son Curtis, his wife Kelly, and granddaughters Ashley and Natalie, all of Springdale. Services will be at the First United Church of Springdale on Tuesday April 2nd, at 11:00AM. Interment will be at the Fort Smith National Cemetery on Friday April 5th, at 2:00PM. Online condolences may be left at www.siscofuneral.com

Donna Gail Schreier Morris passed away peacefully at Washington Regional Medical Center on March 16, 2019. She was born to Esther Howard Schreier and William Lawrence Schreier of Fort Smith, Arkansas in 1937. An only child, Donna grew up in... View Obituary & Service Information

The family of Donna Gail Morris created this Life Tributes page to make it easy to share your memories.

Send flowers to the Morris family.