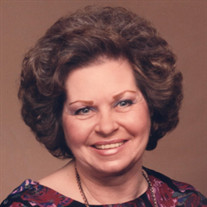 Dorothy Andrea Wiles, 86, of Fayetteville passed away on Friday, June 14, 2019. She was born on November 14, 1932 in Chicago, Illinois to Joseph and Martha D’Asaro. Some may remember Dorothy’s smile at the counter of Kentucky Fried Chicken in Fayetteville, where she worked for many years. After retirement her attachments to community, home and family were the mainstays of her life. She was preceded in death by her parents and her husband, Arvil Lee Wiles. Survivors include two sisters, Joan Marks of Palatine, Illinois and Susan Trammell of Santa Ana, California; three sons, Raymond Allan Lemieux of Thousand Oaks, California, Richard Lee Wiles of Ontario, California, Gary Lynn Wiles of Jomtien Beach, Thailand; one daughter, Beverly Wiles Shotwell of Napa, California; four grandchildren and four great-grandchildren. Graveside services will be held on Saturday, June 22 at 10AM at Baptist Ford Cemetery in Greenland, Arkansas. In lieu of flowers, a donation to the 7hills Homeless Center of Fayetteville is suggested. Online condolences may be left at www.siscofuneral.com

Dorothy Andrea Wiles, 86, of Fayetteville passed away on Friday, June 14, 2019. She was born on November 14, 1932 in Chicago, Illinois to Joseph and Martha D&#8217;Asaro. Some may remember Dorothy&#8217;s smile at the counter of Kentucky Fried... View Obituary & Service Information

The family of Dorothy Andrea Wiles created this Life Tributes page to make it easy to share your memories.

Dorothy Andrea Wiles, 86, of Fayetteville passed away on Friday,...

Send flowers to the Wiles family.