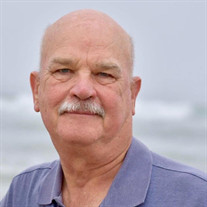 Douglas Allen Michael Smoyer of Fullerton, Nebraska and Fayetteville, Arkansas went home to the Lord on December 5, 2020 after a short battle with pancreatic cancer. Doug was born to Lowell Smoyer and Helen Ruthkosky Smoyer July 3, 1951 in Fullerton, NE. An avid hunter and fisherman since his youth, Doug also loved playing baseball and was one of only a few Eagle scouts from his hometown. After high school, he proudly served his country in the United States Navy, and often regaled his family with his adventures on the USS Enterprise and later in the Air Force reserves. After living in California for many years, Doug returned to Nebraska where he reconnected with the love of his life, Karen Rosenbaum, and they were married on the 29th anniversary of their first date: August 8, 1997. They spent the next 23 years together celebrating that love, their families, and their deep faith in God. All who knew Doug speak of his kindness, his faith, and his humor; he truly never met a stranger. His community will remember the love of God that shone through him in so many ways: the thousands of crosses lovingly crafted in his woodshop for those in hospice, the endless patience teaching all the children how to fish or hunt or use a drill or drive a stick shift, and the countless times he simply showed up and pitched in. Doug is survived by his devoted wife and other members of his large and loving family including his children, Jennifer Smoyer Thomas and Scott, Tara Smoyer Vargas and Genaro, and Daniel Serrano and Rachelle; his siblings Roberta Duffy and Dennis, Phyllis Schroeder, Tim Smoyer and Pam, Vicki Croot and Mike, Kevin Smoyer and Sandy, and Lori Dilla and Jamie; his brothers-in law Walt Rosenbaum and Renee, Harvey Rosenbaum and Carol; and Larry Rosenbaum; his cherished grandchildren Sheridan, Xochitl, and Lily Vargas and Presley and Danny Serrano, Jr., as well as many beloved nieces and nephews. Doug is preceded in death by his parents, his sister Mary Deanne Holdorff and his stepson, Larry Serrano. There will be a celebration of Doug’s life at the First United Methodist Church of Springdale on Wednesday, December 9th at 1:00 pm. In lieu of flowers, the family requests you make a donation to the Pancreatic Action Network at pancan.org, or that you support the work of the Springdale First United Methodist Church at www.firstspringdalechurch.org Online condolences may be left at www.siscofuneral.com

The family of Douglas Allen Michael Smoyer created this Life Tributes page to make it easy to share your memories.

Send flowers to the Smoyer family.