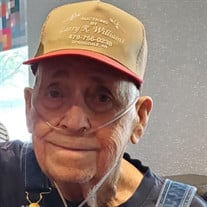 Earl Kelso Garrison, Jr. passed away September 6, 2021 at Circle of Life Hospice in Springdale. Born on Thanksgiving Day, November 28, 1929 in Cass County, Iowa, Earl was the third of seven children and the first born son to Earl K. and Mary E. (Robinson) Garrison. At his birth, his Mom exclaimed he had beautiful red hair and eyes that were brown pools of velvet. She also stated he was definitely worth missing her Thanksgiving dinner. Earl was preceded in death by his parents; siblings, Juanita Elliott, Merle Bookout, Dale Garrison, Garry Garrison, Leila McCarty, and Laura Allen, and one granddaughter, Roxanna Dotson. Earl is survived by his wife of 66 years, Mary (Holland) Garrison of the home; they were married April 14, 1955 in Springdale; children, Pamela McDaniels (John) of Henryetta, Oklahoma; Earl K. Garrison III (Karen) and Floyd Garrison (Vicky) of Hilltop Lakes, Texas; 8 grandchildren; 22 great grandchildren, and 15 great great grandchildren. Earl spent six years in the Army, serving two tours of duty in Germany. From there he entered into a 20 year relationship with the Shell Oil Company in California. At one time owning five stations. One of the most popular was named “Garrison 4” for all the students who worked there. Returning to Arkansas in 1978 he and Mary took to ranching with Earl referring to himself as a frustrated farmer for 20 years. He and Mary kept a Flea Market booth for 15 years - enjoying super relationships with many other sellers. The family would like to thank the following people who were special to Earl: Harold Manon Mike Hunter Harold Parsons Larry Williams and crew at William Auction There are no services planned at this time. In lieu of flowers, the family requests donations be made to Circle of Life Hospice, 901 Jones Road, Springdale, Arkansas 72762.

The family of Earl Kelso Garrison created this Life Tributes page to make it easy to share your memories.

Send flowers to the Garrison family.