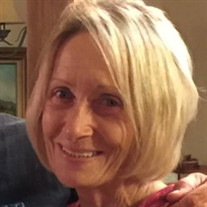 Edna Ruth Newton, 72 years of age, passed away on Saturday, January 23, 2021 in Rogers Arkansas. Edna was born on September 23, 1948 in Cowell, AR to the late Joe Junior and Bonnie Edna Peoples. There were seven children in her family and she was the first born daughter. Joe Wayne and James Peoples preceded her in death. Surviving siblings include Kenneth (Sharon) Peoples of Lowell AR, Juanita (Robert) Bunch of Springdale AR, Helen Godwin of Ava MO, and Jimmy Peoples of Oklahoma. Edna graduated from Springdale High School in 1966 and later earned her cosmetology license in both Arkansas and Missouri. Edna married Billy Ray Newton on July 8, 1980 and together with her two children, they formed a family and resided in Olathe, Kansas. Her oldest child, Rick Combs is married to Amy and they have two children, Peyton (Paige) and Parker, who all reside in Northwest Arkansas. Edna’s youngest child, Deanna Easton, lives in Fayetteville and has two daughters, Mackenzie and Macklaine. Edna is also admired and held close by her husband’s family and inlaws including Katherine Joann and the late William Henry Newton. Edna was a loving and faithful person and always had a smile on her face. She will always be remembered for her style, her class and the way she made others feel. As a young adult she was active in a variety of sports and was a business owner. She was a cosmetologist for over 30 years; yet, her most important job was that of making her house a home. She enjoyed fishing with her husband, watching her daughter play softball, sewing and gardening. She endured health issues and dementia much too early in her life but fought with everything she had. She is to be remembered for her bravery and determination. A celebration of Edna’s life will take place at the Sisco Funeral Chapel in Springdale, Arkansas at two o’clock on Friday, January 29, 2021. Although her final resting place will be Wilson Cemetery, she will forever be in our hearts.

Edna Ruth Newton, 72 years of age, passed away on Saturday, January 23, 2021 in Rogers Arkansas. Edna was born on September 23, 1948 in Cowell, AR to the late Joe Junior and Bonnie Edna Peoples. There were seven children in her family and she... View Obituary & Service Information

The family of Edna Ruth Newton created this Life Tributes page to make it easy to share your memories.

Send flowers to the Newton family.