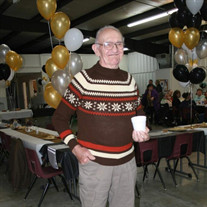 Edward Jacob Masa of the Wheeler Community near Fayetteville, Arkansas passed away September 15, 2019 at his home. He was born in Sebewaing, Michigan on September 16, 1927 to Frank and Pauline Masa. He was raised on a large dairy farm in Bad Axe, Michigan. He entered military service on February 5, 1946 and was discharged honorably as a private first class of the 35th California Maintenance Division on July 15, 1947. He married Rose Marie Muether on June 19, 1954. After 60 years of marriage Rose preceded Edward in death on February 8, 2014. His parents, Frank and Pauline and all his siblings preceded him in death also. Survivors include 10 children, Keith and Susan Masa of Knoxville, Iowa, Kevin Masa and son Edward of Johnson, Arkansas, Michelle and George Hoag of Winslow, Arkansas, Laurie and Bill Shultz of Sanford, Michigan, Karl and Betty Masa of Cavete Amadeo Philippines, Konrad and Gayle Scoval-Masa of Knoxville, Iowa, Angelene and Doug McGarrah of Lowell, Kristian Masa and daughter Emily of Winslow, Arkansas, Korey and Heather Masa of Springdale, Trina and Lester Moten of San Bernardino, California. Ed and Rose had twenty five grandchildren, twenty three great grandchildren and many nephews, nieces and cousins. Ed was the baby of his generation, he is preceded in death by his brothers and sisters, Felix, Thomas, John, Lucy, Augustine (Vicky), Helen, Josephine, Frances, Valeria (Viola) and Berniece (Bunny), he leaves behind a great family legacy. Ed loved to hunt, fish and work in the garden and he taught his children to do the same. Time with all family gatherings were a joy to attend with music, food and celebrations of weddings, graduations, reunions and many others are fondly remembered by many of us who will miss Ed very much. Graveside memorial service will be Monday, September 23, 2019 at 11am at Fayetteville National Cemetery in Fayetteville. Online condolences may be left at www.siscofuneral.com

Edward Jacob Masa of the Wheeler Community near Fayetteville, Arkansas passed away September 15, 2019 at his home. He was born in Sebewaing, Michigan on September 16, 1927 to Frank and Pauline Masa. He was raised on a large dairy farm in Bad... View Obituary & Service Information

The family of Edward Jacob Masa created this Life Tributes page to make it easy to share your memories.

Edward Jacob Masa of the Wheeler Community near Fayetteville,...

Send flowers to the Masa family.