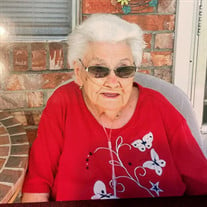 Essie Gertrue James (Atkinson) age 88 of Springdale, Arkansas passed away on Saturday, September 11, 2021. She was born in Elk City, Oklahoma on November 3, 1932 to William Frank and Golda Lea Atkinson. Preceded in death by her parents, sister Lillie James and a daughter Jona Lea. She is survived by a son Harmon James Jr and daughter-in-law Carolyn James; daughter Karen O’Neal and significant other Terry Luther; brothers James Atkinson, Elmer Atkinson, Joe Atkinson, Eugene Atkinson, Jerry Atkinson; nieces Mary Jaro, Sheila Hatfield, Marsha Barger; a nephew Gary James and loved by many grandchildren, great grandchildren, and great great grandchildren. Essie couldn’t wait to attend elementary school at Pilgrims Rest in Springdale graduating in 1946. While she wanted to attend high school there wasn’t enough money at the time. She and her brother went to work at Mayfield Canning Company to be able to pay for her first year of high school. At the time high school took 3 years but it took her 5 because she worked for short stints in drug stores in Tulsa, Oklahoma and Fort Smith, Arkansas to pay for her education. Graduating as an honor student from Huntsville State Vocational School in May of 1952. That same year Essie married Harmon “Jack” James. She later received her Certificate in Bookkeeping from Springdale High School in 1968. After working for many years as a bookkeeper she retired in 1996 from Mildred’s Tax Service in Springdale. Essie loved quilting, embroidery, crocheting doilies and afghans, sewing vests for Springdale Riding Club and saddle blankets for Springdale Quadrille. Her belief in education was so great, she as a young mother helped raise money to expand the Pilgrims Rest School. She liked watching football, golf, movies, and horse racing. She enjoyed cooking, reading, writing letters, working sudoku puzzles and collecting recipes, cookbooks, and hens. Her greatest attributes were her intelligence, sense of humor, kindness, willingness to jump in to fix anything and once designed her own home. Growing up with very little she learned to be very innovative with the little they had on hand. She had the ability to repurpose things which was the product of taking good care of all the things she had. Her home was open to anyone and the dinner table always had enough for everyone. Funeral Services will be at 10 a.m., Thursday, September 16, 2021, at Sisco Funeral Chapel, Springdale, Ark. Burial will be immediately following at Friendship Cemetery, Springdale, Ark. Visitation will be 4-6 p.m. Wednesday September 15 at Sisco Funeral Chapel. In lieu of flowers, memorial contributions can be made on behalf of Essie James to the Springdale Fire Department, 417 Holcomb, 2nd Floor, Springdale, AR 72764. Online condolences may be left at www.siscofuneral.com

Essie Gertrue James (Atkinson) age 88 of Springdale, Arkansas passed away on Saturday, September 11, 2021. She was born in Elk City, Oklahoma on November 3, 1932 to William Frank and Golda Lea Atkinson. Preceded in death by her parents, sister... View Obituary & Service Information

The family of Essie Gertrue James created this Life Tributes page to make it easy to share your memories.

Send flowers to the James family.