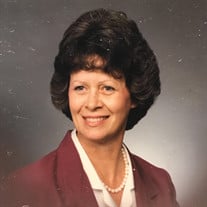 Evelyn “Carol” Sutherland, 79, of Lowell, AR, passed away in her home with family by her side on November 20, 2019, after a hard-fought battle with cancer. In hospice care for four weeks prior to her death, Carol died peacefully in her sleep. She leaves her daughter, Sherrie Dixon and husband Frank and grandchildren Nicholas and Natalie; daughter Diane Caron and husband Mike and granddaughters Shaleh, Shyanne, and Sheridan; daughter Karen Aspenson and husband Erik and grandchildren Dain, Emma, Finn, and Beau; son Dain Sutherland and wife Erika and grandchildren Joseph and Hannah; and William Sutherland, former husband and good friend of Carol. Carol was born in Van, MO, on November 7, 1940, to the late Parker and Opal (Boos) Watson. She was preceded in death by two older brothers and leaves behind a younger sister, Janice Sharp of Bolivar, MO. She graduated from Bolivar High School in 1958. Carol was a loving wife and homemaker for the biggest part of her life, working tirelessly to make most of her children’s clothes as well as her own. Renowned for her pies, she was a fantastic cook. She also crocheted countless afghans for newborn babies. She became a Christian in early adulthood and was a lifelong church member, raising her children to be strong followers of Christ as well. Most recently, Carol was a member of Elmdale Baptist Church in Springdale, AR. In her later years, she was a caretaker for her mother for a period of time. She also was available to care for her grandchildren for extended periods, much to everyone’s delight. She loved to play games and never “let” anyone win, so her children and grandchildren have a strong, competitive spirit. Her children wish to thank her sister, Aunt Janice, for moving in with her and being a wonderful caretaker and companion during her battle with cancer. A memorial service will be held at Crossway Baptist Church in Springfield, Missouri on Saturday, November 23rd at 1 p.m. Online condolences may be left at www.siscofuneral.com

Evelyn &#8220;Carol&#8221; Sutherland, 79, of Lowell, AR, passed away in her home with family by her side on November 20, 2019, after a hard-fought battle with cancer. In hospice care for four weeks prior to her death, Carol died peacefully... View Obituary & Service Information

The family of Evelyn "Carol" Sutherland created this Life Tributes page to make it easy to share your memories.

Send flowers to the Sutherland family.