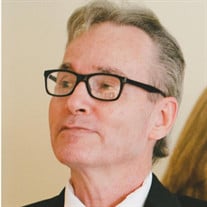 Ezra Harding Breashears, Jr., 67, passed from this life to an eternal beginning with his Lord and Savior, Jesus Christ, on June 5, 2022. Ezra was known as “Buddy” by family and friends for most of his life, however in later years he wanted to be known as Ezra. Mr. Breashears attended high school at Little Rock Central High School and after graduation pursued a degree in accounting at the University of Arkansas at Little Rock and Weatherford Community College in Weatherford, TX. He worked as a contract specialist in land management for several years, and later was an accountant for J & M Construction Company in Alvord, TX Ezra was preceded in death by his father, Ezra Harding Breashears, Sr.; his mother. Martha Muriel Breashears; one brother, Larry Breashears; and two sisters, Gladys Smith and Gail Moss. He is survived by two daughters; Sarah Sameni of Dallas, TX and two grandsons, Alexander Sameni and Nico Sameni, also of Dallas; Clara Breashears of Colorado Springs, CO; and a son, Joseph Breashears of Fayetteville, AR. He is also survived by two siblings; Elaine Ledgerwood, Springdale, AR; and Bruce Breashears of Chattanooga, TN. He had been a member of the Federal Housing Authority board at the senior housing complex in Fayetteville and enjoyed talking/debating local and national politics with friends and relatives. Ezra especially enjoyed time with family and friends, and those special moments with his grandchildren. He will be missed. Visitation will be Wednesday from 5 to 7pm at the funeral home. Funeral services will be Thursday, June 9, 2022 at 2pm at Sisco Funeral Chapel of Springdale. A graveside service will be held at the Breashears Cemetery in Story, Arkansas on Friday, June 10, 2022 at 1pm under the direction of Thornton Funeral Home in Mt. Ida. Online condolences may be left at www.siscofuneral.com

Ezra Harding Breashears, Jr., 67, passed from this life to an eternal beginning with his Lord and Savior, Jesus Christ, on June 5, 2022. Ezra was known as &#8220;Buddy&#8221; by family and friends for most of his life, however in later years... View Obituary & Service Information

The family of Ezra Harding Breashears Jr. created this Life Tributes page to make it easy to share your memories.

Ezra Harding Breashears, Jr., 67, passed from this life to an...

Send flowers to the Breashears family.