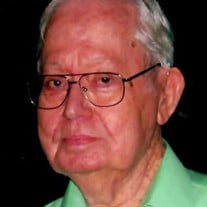 Fred Phillips, 92 of Springdale passed away Sunday, August 11, 2019 at Washington Regional Medical Center in Fayetteville. He was born April 14, 1927 in Dexter, Georgia to James Oliver and Mattie Davis Phillips. Fred was a World War II veteran and served in the United States Navy from age 17 to 21. He graduated from the University of Georgia with a bachelor's degree in food technology. He worked in hotel and restaurant management and was the owner of the Airport Cafe in Springdale for 14 years. He loved to fish, was an avid sports fan, and enjoyed his favorite team, the Bulldogs from his Alma Mater, the University of Georgia. He was preceded in death by his parents, Major Phillips, Mavis Phillips Bellflower, Lamar “Son” Phillips, James Clarence”Jiggs” Phillips , Henry Earl ”Pete” Phillips , Geneva “Gema” Phillips Porter and Jerry Malcom”Smokey” Phillips. Survivors include his wife, Lillie Marie Mumphrey Phillips of the home; one son, Clifton (Clif) Phillips of the home; one daughter, Patricia “Patty” Phillips Bacon (and husband Darrel) of Louisiana, one brother, Charles E.”Jabo” Phillips of Florida; three grandchildren, Diana, Danielle and Jean’ (and wife Amber); three great grandchildren, Christian, Gracie and Jameson; his favorite niece, Denise Phillips Strickland (and husband Danny) of Georgia, and other nieces and nephews. No services are planned. Arrangements are under the direction of Sisco Funeral Chapel of Springdale. Online condolences may be left at www.siscofuneral.com

The family of Fred Phillips created this Life Tributes page to make it easy to share your memories.

Send flowers to the Phillips family.