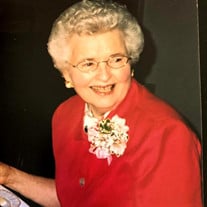 Our wonderful mother went into the presence of her wonderful Savior Wednesday at dawn on November 18, 2020. She left from home, as she had desired, with family attending. We are blessed. Gay was born Dorothy Gay to Vaden N. and Frances Sims Slifer on April 18, 1928 in Stuttgart, Arkansas. She was buried in Lonoke on Friday, November 20. There were seasons of her life, as there are for all of us. Gay grew up in Lonoke, Arkansas , and graduated from Lonoke High School in 1946. That fall, she took a train to Fulton, Missouri, where she matriculated at William Woods, then an all-women’s college. Graduating from their two-year degree program, she returned to Lonoke. Her former high school English teacher, Mrs. Wheat, played matchmaker for her son, Edward. Ed and Gay Wheat married in September, 1948, in Lonoke and honeymooned one night at the Peabody in Memphis. Ed, with Gay, then returned to Little Rock to complete his medical degree in family practice. Gay worked in the administrator’s office, among her other tasks, typing 100 wpm, without error, on a manual typewriter, mind you! Ed, as student, and Gay, working on campus, were eligible for the twenty-five cent cafeteria lunch. For supper, they each had a pint of ice cream. Graduating in 1952, Ed, Gay and firstborn daughter, Melinda Gay, moved to Springdale, allowing them an escape from Lonoke’s legendary swarms of “Piper Cub-sized” mosquitoes and the DDT sprayed as a control measure. Springdale’s doctors were pleading for help with their patient load during the Polio epidemic of the time. Ed contracted Polio twice, requiring hospitalization. Polio came home with him and infected daughter, Joy Frances, born in 1953. For her, there were surgeries, casts, and a leg brace in her early years. At about one year, third daughter, Merry Ann, born in 1955, was diagnosed with hip dysplasia, necessitating surgeries, traction, then a cast from the waist down for months. Mother had her hands full!! During this time, Ed got his pilot’s license, as did Gay-- so she could bring the plane down if the unexpected occurred with Ed piloting. Ever practical and prepared, our Mother was. Gay had the gift of hospitality, warmly welcoming family and friends into their home. In the early ‘60’s, Ed and Gay thoughtfully designed and built their dream home on Circle Drive. In all of this, the primary thing about our mother became her faith. Ed and Gay were in their late 30’s when a new season of spiritual awakening took place. Mother followed Daddy into the realization that it was necessary to individually acknowledge and accept that Christ’s cross work covers the penalty God exacts for our own innate, selfish, sinful nature’s actions, attitudes, and intentions. Doing so, removes that barrier of sin between man and God, allowing one to enter into a personal, God-directed life on this earth and is the only path into His presence at death. “These things are written….that you may KNOW that you have eternal life….” I John 5:13a As their faith walk developed through studying the Scriptures and praying together, opportunities opened to treat Ed’s patients’ physical and spiritual needs. Also, God began to lead them to emphasize Biblical principles that create loving, lasting Christian marriages. This brought a new season of traveling, speaking, co-authoring best-selling Christian books and audio materials and also requests to have these translated into many languages and circulated around the globe. As they will, seasons change. A new ministry of caregiving began. Ed’s father (from Lonoke) moved into their home. Gay’s mother, Frances Robins, had moved to Springdale from Little Rock and required more of their help. Sadly, Gay’s beloved Ed began to exhibit the family scourge of Alzheimer’s. She was juggling all 3. Again, her hands were full. However, this time she had her faith to strengthen and sustain her and much prayer support from family and friends. Each loved one died in succession. Her Ed died the week of the 9/11 attacks. Thus began a new season of widowhood lasting 19 years. Mother remained steadfast in her commitments and callings. We counted on her to faithfully pray daily and specifically for each family member by name - all 34 of us. She continued to study God’s Word and hosted a weekly Bible class in her home into this past March. She continued to take counseling calls from around the world. She was faithful to attend and support the endeavors of Fellowship Bible Church of Springdale. Always, Mother remained gracious and grateful. We are blessed. A special word of recognition is due our caregiver, Araceli Munoz, who loved and cared for our precious mother as her own. The Lord sent you. We are grateful. Those who have gone before: Husband, Marcus Edward “Ed” Wheat, Jr., M.D. (in 2001), an infant grandson, Jonathan Edward Mason (in 1975), and daughter, Merry Ann Peoples (June 27, 2020). Those who remain: Melinda Mason and, husband Sam, of Springdale and 3 children; Christina Domer and husband Damon, and children, Samuel and Abigail of Broken Arrow, Oklahoma, Carrie Rogers and husband Lucas and children, Gabriel, Jude, Eli, and Eleanor of Plano, Texas, and Marcus Mason and wife Kara and children, Aubrey and Braden of Tontitown. Joy Shoemaker and husband Rick and 7 children: Richard Shoemaker and wife Julianna and their 3 children, Ivy, Malachi, and Samantha, and Elizabeth of Oklahoma City, Michael of Tulsa, John of Mexico, Julie of Dallas, and Joseph and Victoria, both of Tulsa. Son-in-law, Rusty Peoples of Barling and son, Ray and wife Abbi and sons, Graham and Owen of Shawnee, Kansas. - Melinda Wheat Mason

Our wonderful mother went into the presence of her wonderful Savior Wednesday at dawn on November 18, 2020. She left from home, as she had desired, with family attending. We are blessed. Gay was born Dorothy Gay to Vaden N. and Frances Sims... View Obituary & Service Information

The family of Gay Wheat created this Life Tributes page to make it easy to share your memories.

Our wonderful mother went into the presence of her wonderful...

Send flowers to the Wheat family.