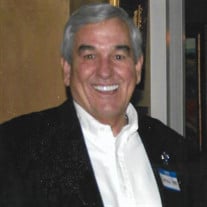 Gerald L. Harp passed away October 16, 2020 at 8:17 p.m. Gerald was the son of Harvard and Floy Harp, founders of Harps Food Stores. He was born March 21, 1940, in Springdale, Arkansas. Gerald married Vicki in 1989, she was the inspiration of his life, and motivated him to levels that he did not know he could achieve. Gerald graduated from Springdale High School in 1958 and helped organize the class reunions during the years following graduation. Served his country in the US Army, most notably during the Berlin Wall Crisis. Years later he would be instrumental in a monument being erected for Veterans of Springdale Schools who died serving their country. He returned home to graduate in 3 ½ years from the University of Arkansa in 1966. Gerald joined the family business, Harp’s Food Stores, where he worked for 45 years. He served the last seven years as the President of the company and was instrumental in selling the 70 year old company to the Employees in 2001. He gave 10% of his share of the sale to long term employees of the company. Harp’s Food Stores operated on the belief that if associates and customers were served, that the company would be successful. Gerald has been a member of the First Baptist Church of Springdale since 1940. He and Vicki believed in faithful tithing and supporting the church. Gerald enjoyed annual fishing trips to Alaska, elk hunting in Colorado (38 yrs) and pheasant hunting in South Dakota with friends. Gerald was a Rotarian, joining the Springdale Rotary Club in 1968 serving as President 1977-78. He served as District Governor of District 6110, RI, 2004-05 in the 100th Anniversary Year of Rotary International, with a firm belief that Rotary benefited mankind throughout the world. While District Governor of District 6110 and a Paul Harris Fellow, he helped over 800 other Rotarians become Paul Harris Fellows. District 6110 was the number two club of 150 districts in the United States, fifth in the world of 529 districts, and led the U.S. in total membership growth. He was a level six donor to the Rotary Foundation, endowed a scholarship to the University of Arkansas where a low income student could come and study. Endowed a Rotary Peace Scholarship believing this would be a major source of supporting peace in the world. He supported Rotary in many other ways from delivering loads of medical supplies and equipment to the District Medical Supply Warehouse to support digging water wells in Nigeria, Nicaragua, Peru, and other countries. He purchased soybean/milk producing machines for the country of Peru. Gerald was a major supporter of the Polio Plus campaign that eradicated Polio from the world. He was a major donor to the Wheelchair Foundation, Chamber of Commerce, Broyles Matthews Scholarship, and Springdale Rotary Family Park. He supported Springdale Schools and helped finance Harp’s Elementary School in honor of his parents and their children. He served on many charitable boards during his life including the United Fund, as Fund Chairman/President, Ozark Guidance Foundation Board, Salvation Army, Red Cross, and the Washington Regional Hospital Board. Gerald was a life member of the Rocky Mountain Elk Foundation, Mule Deer Foundation, National Turkey Federation, Ducks Unlimited, Trout Unlimited, Arkansas Historical Society, Arkansas Alumni Association, Springdale Schools Alumni Association, AAII, Consumer Reports, National Rifle Association, and was the first Life Member of the National Hummingbird Society of Arkansas. Gerald enjoyed supporting the Washington 4-H kids in the premium buying of their animals at the county fair each year and has left support for this project in the future. Gerald and Vicki enjoyed cruising the many seas and oceans of the world and were fortunate to visit many countries. They enjoyed staying in Branson because of it’s family orientation and peaceful atmosphere. Gerald was proud to have lived in Springdale, Arkansas. Based on it’s great southern hospitality, along with the persons in the community who gave of their time and resources, he always said it was the best place in the world to live and raise a family. He believed that the quality of your life is greatly influenced by helping others less fortunate than you, prayer, and by taking care of your body through exercising and proper nutrition. Gerald and Vicki are very appreciative of Pam Everett as a long time associate, and Roger Collins who was instrumental in leading Harp’s Food Stores employees after the purchase of the company by the employees. “Made many mistakes in my life and being a perfectionist, tried to correct as many of them as possible and apologize for the ones that couldn’t be corrected.” Gerald Harp, 2005 He was preceded in death by his daughter Kimi, son Jerry, sister Judy, brothers Don and Reland, and his parents. He is survived by his wife Vicki, his daughters Timi Ray; her husband Frank; Jackie Harp. Step Daughters, Christy Moreno; husband Gerry, Heather Scholl. Grandchildren; Kourtney Blythe, Frankie Ray,Tiffani Ray, John G. Ray, Kate Williams; husband John. Joshua Moreno; his wife Sydney S. Moreno; Sydney B. Moreno, Noah Scholl and Nick Scholl. Great-grandchildren Parker and Kimberly Ray, Nyla Barbosa, Haley, Haiden, and Jase Willaims. Funeral service will be Thursday, October 22, 2020 at 2pm at Cross Church in Springdale. Burial will follow in Friendship Cemetery. Memorials should be made to the Springdale Rotary Charitable Foundation, P.O Box 6006, Springdale, AR 72766 for the purpose of digging water wells. Online condolences may be left at www.siscofuneral.com

Gerald L. Harp passed away October 16, 2020 at 8:17 p.m. Gerald was the son of Harvard and Floy Harp, founders of Harps Food Stores. He was born March 21, 1940, in Springdale, Arkansas. Gerald married Vicki in 1989, she was the inspiration... View Obituary & Service Information

The family of Gerald L. Harp created this Life Tributes page to make it easy to share your memories.

Send flowers to the Harp family.