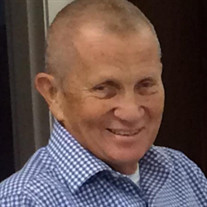 Glenn Harold Alford, 81 of Fayetteville passed away Friday, September 3, 2021 at Willard Walker Hospice in Fayetteville. He was born July 25, 1940 in Berryville, Arkansas to Carlos Owen and Ruby Muriel Buckner Alford. He was a graduate of Springdale High School class of 1960. He was an avid racing fan and worked in the pits of a Lotus racing team during the early 1960’s. In 1965 this love of racing took him to the Green Valley Raceway where his team pitted next to Carroll Shelby and witnessed and photographed the first race of Shelby’s Mustang GT 350. Glenn loved airplanes and even earned his pilot's license before getting his drivers license. He was an avid builder and remodeled several homes during his life. He was a life member of the NRA. Glenn never met a stranger, he loved to meet people and hear their stories. He worked for Minton Machinery in Oklahoma City, and for Kearney Electric in Fayetteville and he retired after 29 years at Bargo Engineering. Survivors include his wife, Mary Pollock Sheets Alford of the home, one son, Kelly Owen, wife Shelly of Farmington, three daughters, Marcia Rogers, husband Mike of Fayetteville, Fran Albritton, husband Ron of Conway and Patty Harris, husband Harry of Fayetteville, two brothers, Bill Alford, wife Berniece of Hindsville, Tim Logue, wife Patricia of Goshen, one sister, Brenda Mullins, husband Neil of Lowell, eleven grandchildren, Garner, Parker, and Addison Alford, Michael and Shane Higgins, Jeff and John Albritton, Michael Thorpe, Kristina James, Stephanie Harris, and Ashley Harris and three great grandchildren, Avery and Audrey Albritton, Hendrix Winfrey and one on the way. Memorial services will be Wednesday, September 8, 2021 at 10:30 a.m. at Sisco Funeral Chapel of Springdale. Online condolences may be left at www.siscofuneral.com

Glenn Harold Alford, 81 of Fayetteville passed away Friday, September 3, 2021 at Willard Walker Hospice in Fayetteville. He was born July 25, 1940 in Berryville, Arkansas to Carlos Owen and Ruby Muriel Buckner Alford. He was a graduate of Springdale... View Obituary & Service Information

The family of Glenn Harold Alford created this Life Tributes page to make it easy to share your memories.

Send flowers to the Alford family.