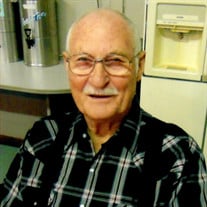 Granvil F. “Tub” Evans, 81 of Hindsville passed away Saturday, February 6, 2021 at his home. He was born February 21, 1939 in Hindsville to William Wilbert and Rainey Jane Rice Evans. Granvil attended Astounding Grace Church. He drove a semi-truck for E.L. Reddish for 10 years and Walmart for 18 ½ years. After retirement he worked for Don Anderson for 4 years. He was also a farmer and an outdoorsman who found great enjoyment in checking his cattle and working in the hay field. He also had a great love of music. He was preceded in death by his previous wife, Beulah Florence Evans, one son Randall Glenn Evans, his parents, William and Rainey, four brothers and three sisters. Survivors include his wife, Donna Reynolds Evans of the home to whom he was married on December 18, 2009; two sons, Granvil Rick (Terri) and Ronald Dean, two step-daughters, Carla Hatfield (Aaron) and Anita Burke (Nick), 10 grandchildren and one sister, Lucille West of Clifty. Visitation will be at Astounding Grace Church in Hindsville Tuesday, February 9, 2021 from 5 to 7pm. Funeral services will be Wednesday, February 10, 2021 at 10am with Pastor Loren Collins and Pastor Max Bowlin officiating. Burial will follow in Colbaugh Cemetery. Pallbearers will be Steve Griggs, Royce Smith, Rod Reynolds, Buzz Gosvener, Richard Lane and Mike Johnson. Online condolences may be left at www.siscofuneral.com

The family of Granvil F. "Tub" Evans created this Life Tributes page to make it easy to share your memories.

Send flowers to the Evans family.