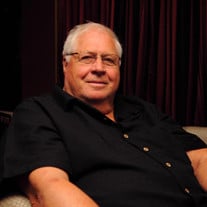 Hartzell Jones, age 76, was born August 1, 1944 and died July 8, 2021 surrounded by his loving family. Hartzell was a humble and gentle giant – at home with his family, as well as, in his work as Deputy Superintendent with the Springdale School District. He valued his family greatly and exhibited a strong commitment to his work as an educator. Hartzell was born at home in Waldron, Arkansas. From hishumble beginnings he became a successful coach, a beloved teacher, and an outstanding educational leader. After graduating from Mena High School, Hartzell attended the College of the Ozarks (University of the Ozarks, in Clarksville Arkansas), where he worked on campus to pay for his college tuition. He would often have to hitch-hike home for the weekend since owning a car was out of the question, financially. After graduation from College of the Ozarks, he married Debby Green in 1967; they were married for eighteen years. In 1978 Debby and Hartzell expanded their family to include son, Trent Jones. Hartzell’s tenacity in gaining an education paid off – he became the first college graduate in his family, completed his Masters Degree and his Specialist Degree from the University of Arkansas. Upon graduation he was immediately hired at Gentry High School in Gentry, Arkansas (1966-1969) to coach and teach. After 3 years he was invited to be a teacher and coach at Southwest Junior High School (1969-1973). Many people remember Hartzell as a kind, compassionate and caring coach. He would often be stopped at games or other events by his former players or students to express their appreciation or fond memories of him as a coach. His leadership skills were recognized and he was promoted as the assistant principal (1978-1980), then principal at Southwest Junior High School (1980-1983). His innate leadership traits were once again recognized by the new superintendent at the time, Dr. Jim Rollins, and he was promoted to serve at the district level. Hartzell served as Deputy Superintendent for the Springdale School district for 30 years (1983-2013). During his tenure, Springdale had unprecedented growth and change. He interviewed and processed the hiring of over 1500 teachers. He aided in the vision for and the construction of multiple schools. He worked diligently to support the families, teachers and administrators as they faced challenges and sought resolutions to difficulties that might arise. In his role as Deputy Superintendent, he gained a reputation as being a very fair, opened minded, and thoughtful listener. He became a mentor and guide to educators in the district and across the state of Arkansas. Hartzell was proceeded in death by his mother, Martha Evans, father, Ramey Evans Jr. and sister Wanda Jo Edmondson. He is survived by Larry Edmondson (brother-in-law), niece Cassie Edmondson and her children Madison and Abby, niece Natalie Disney and husband Michael and children, Lilly, Aiyana, and Bryce, and nephew Kevin Edmondson. Hartzell married Marsha Brooks Hayward in 1991. They celebrated 30 years of marriage June 16, 2021. He was very fond of showing his affection with a special bouquet of flowers. He took the selection of flowers quite personally and went to the florist shop to personally pick out the vase and the flowers. According to the florist, he was quite unique in his interest in creating that special surprise for Marsha. Hartzell came from a comparatively small family, he adjusted to his ever-growing family and he and Marsha enjoyed many fun occasions with their four children in their blended family – son, Trent Jones and wife Bayleigh, step-son Jason Hayward and wife Angela, Step-son Jacob Hayward and wife Michelle, and step-daughter Jessica Bryan and husband Stewart. He was entertained by his 8 grandchildren: Erika Phillips and husband Taylor, Alex Hayward, Noah Hayward, Rachel Hayward, Benjamin Bryan, Joseph Bryan, Ramey Jones and Ross Jones; and the 2 great-grandchildren, Gavin and John Phillips. Holidays were especially fun and a bit chaotic. His love of athletics was continued in his dedication to Arkansas Razorback athletic events. He arranged for the family to have tickets to Football and Basketball games. Tailgating was a highlight for him and his family. At the end of a Razorback game, he was either elated by a win or devastated by the loss – no in-between in his passion about the game. Hartzell received many recognitions during his distinguished career as a professional educator. His accomplishments include: Coach of the Year in Basketball, Class B Conference in 1969; Administrator of the Year by Arkansas Association Education Administrators in 2008; Outstanding Educator by the Springdale Chamber of Commerce; Graduation speaker for Har-Ber High School 2010. Upon his retirement in 2013, the basketball gymnasium at Lakeside Junior High School was named in his honor; Inductee into Springdale Public School Education Foundation (SPSEF) cornerstone society in 2015; he was inducted into the Springdale School District Athletic Hall of Fame Class of 2016 and the Springdale High School Athletic Wall of Fame Class of 2019. Along with Marsha, he established the Promise and Potential Scholarship with the SPSEF. His community support includes being a Friend of the Walton Arts Center, Patron of the Arts Center of the Ozarks, Contributor to the University of Arkansas Alumni Foundation and the Razorback Foundation and a supporter of the Shiloh Museum. Hartzell was loved greatly, admired by many, and served as a role model and mentor to those whose lives he touched – at school and at home. He will be forever loved and cherished by his family and friends. Funeral arrangements are being made by Sisco Funeral Home. Visitation will be held on Wednesday, July 14, 2021 from 4 to 6 P.M. at the First United Methodist Church, 206 West Johnson, Springdale Arkansas. A “Celebration of Life” service will be held at the First United Methodist Church on Thursday, July 15,2021 at 11:00 A.M. In lieu of flowers donations can be made to: “Promise and Potential Scholarship” with the Springdale Education Foundation, 409 N. Thompson, Springdale, AR 72764 ; Contact: Chris Stecklein . Email: [email protected] 479-790-9221. Online gifts may be made by going to spsef.org. Springdale Athletic Foundation, C/O Hartzell Jones, PO Box 6305; Springdale, AR 72765 Contact: Donald Tucker SAF Vice President, 479-200-4434; email: [email protected]

Hartzell Jones, age 76, was born August 1, 1944 and died July 8, 2021 surrounded by his loving family. Hartzell was a humble and gentle giant &#8211; at home with his family, as well as, in his work as Deputy Superintendent with the Springdale... View Obituary & Service Information

The family of Hartzell Jones created this Life Tributes page to make it easy to share your memories.

Send flowers to the Jones family.