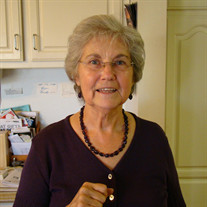 Hattie Elizabeth Bartram Sharp was born at home in Fort Gay, West Virginia on August 5, 1935 to Clarence Bartram and Nealya Boggs Bartram. She attended elementary school in a one room school house in Greenup, Kentucky where she completed the... View Obituary & Service Information

The family of Hattie Elizabeth Bartram Sharp created this Life Tributes page to make it easy to share your memories.

Send flowers to the Sharp family.