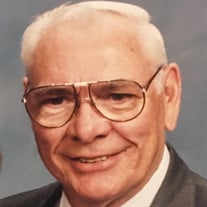 Herman Eugene Mitchell, Jr., 89 of Elkins went home to be with the Lord on Monday, July 29, 2019 at his home. He was born October 23, 1929 in Fayetteville, Arkansas to Herman Eugene Mitchell, Sr. and Ruth Octavia Blackwell Mitchell. He was a Baptist Minister for over 60 years, pastoring churches in Central and Northwest Arkansas. He earned a masters degree in Ministry. He was preceded in death by his parents, his wife, Marie Mitchell, one brother, Bill Mitchell, one sister, Jerri Ford and one granddaughter, Christi Bruich. Survivors include one son, Mike Mitchell and wife Linda of Colorado; one daughter, Carol Speer of Sherwood, Arkansas; two brothers, Michael Mitchell of West Fork, Arkansas and Jimmy Mitchell and wife Jerry of Farmington, Arkansas; two grandchildren, Colleen VanTuyl and Nathan Mitchell and five great grandchildren, Zeke, Grayson, Alyvia, Lucas and Fallon. Memorial services will be Thursday, August 8, 2019 at 11am at Eastside Missionary Baptist Church in Fayetteville with Pastor Tom Hover officiating. Burial will be in Shady Grove Cemetery. Arrangements are under the direction of Sisco Funeral Chapel of Springdale. Online condolences may be left at www.siscofuneral.com

The family of Herman Eugene Michell Jr. created this Life Tributes page to make it easy to share your memories.

Herman Eugene Mitchell, Jr., 89 of Elkins went home to be with...

Send flowers to the Michell family.