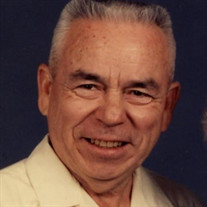 Houston Boscoe Teehee, of Springdale, Arkansas, passed away after ninety years of life Thursday, December 31, 2020 at Promenade Nursing Home in Rogers, Arkansas. Born January 15, 1930 to Davis “Dutch” and Carrie (Dixon) Teehee in Earlsboro, Oklahoma, Houston was the third of four children and quickly displayed a penchant for helping others when, by the age of nine, he learned to drive the family truck. Houston spent a memorable childhood camping and fishing on family trips along the Illinois River in Oklahoma. In 1947, he graduated from Tahlequah High School and stayed in the area to help his family move to Kansas City. In 1948, Houston and his cousin decided to join the Navy, but, as the nearest recruiting station was in Muskogee, they had to hitch-hike. Early the next morning, and thirty miles later after no luck hitching a ride, they arrived at the recruiting station as determined as ever and signed up for the Navy. Houston went on to serve as an Electrician’s Mate in the US Navy, first on board the destroyer USS Moale in the San Diego area, and then on the USS DeHaven and USS Piedmont in Bremerton, WA after transferring in order to stay near his brother, JD, on the west coast. In 1949, in Bremerton, where his mother, Carrie, was a seasonal fruit migrant worker, Houston and Carrie attended a gospel meeting. That night, both of them responded to the gospel and put on Christ in baptism. In February 1950, after serving for two years in the Navy, Houston received an Honorable Discharge and returned to Kansas City, KS, where he joined in on blue-grass music with his father and other family friends while working at a GM factory. It was in Kansas City, on November 21, 1951, that he married Arline Davidson, with whom he had three children. In 1956, Houston and his family moved to Bakersfield, CA, where he worked at Lockheed Aircraft Corporation on the U2 plane until Lockheed moved operations to Los Angeles. He then worked as a Correctional Officer with the California Prison System in San Luis Obispo before moving to Springdale, Arkansas with his three young children in 1966. There he bought a tractor and labored in contract farming and fence building, before he moved on to the Post Office as a rural postal carrier, from which he finally retired in October 2000. Houston was a longtime member of the Thompson Street/Robinson Avenue Church of Christ in Springdale where he served, among other duties, as a song leader and custodian. People enjoyed his honest, confident, yet down-to-earth personality so much that numerous couples asked him to preside at their wedding ceremonies, to which he kindly obliged. One shining example of his dedicated service to others was the amount of blood he donated over his lifetime. For giving more than 20 gallons of blood, the Community Blood Center of the Ozarks in Springdale inscribed his name in their Hall of Fame in recognition of his timeless dedication and generosity. Like Will Rogers, Houston never met a man he didn’t like, and everybody liked him. He was married to Nellie V Lee from February 1969 until her death in September 2002, after which he moved to Holiday Island, Arkansas. There, Houston pursued his passion for golfing, being with friends, and enjoying the outdoors. He was a good mandolin player, a skilled fence builder, and an excellent bowler and golfer. He will be dearly missed by his family and fondly remembered by a great multitude of people in the Northwest Arkansas area. He is survived by three children: Cheryl and her husband Dwight Canfield of Rogers, Arkansas; Duane Teehee and his wife Pearl of Fort Collins, Colorado; and Max Teehee and his wife Alice of Searcy, Arkansas. By five grandchildren: Shawnon (Kara) Canfield; Aaron (Candy) Canfield; Alana (Canfield) Burasco; Benjamin (Shelby) Teehee; and Carrie (Schuylar) (Teehee) Davis. By nine great-grandchildren: Brett, Alisson, Justin, and Amelia Canfield; Aries and Mercedese Burasco; and Peyton, Ryleigh, and Houston Teehee. By his sister, Samantha Wilson of Washburn, MO, and by numerous nieces and nephews. He was preceded in death by his parents, one brother (John “JD”) and one sister (Ellen Bass). In lieu of flowers, donations can be made to:greenvalleybiblecamp.com Online condolences can be left at siscofuneral.com

The family of Houston B. Teehee created this Life Tributes page to make it easy to share your memories.

Houston Boscoe Teehee, of Springdale, Arkansas, passed away after...

Send flowers to the Teehee family.