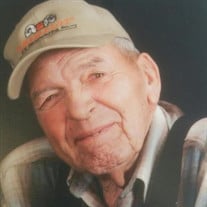 Jack Denton Perry, 89, of Springdale, peacefully passed away at his home on September 2, 2021. He was born on February 16, 1932, to Ivan and Vivian Perry. Jack was a poultry farmer and lifelong cattleman, an avid hunter and fisherman, an Army veteran, a friend to many and even a fishing guide in the early days of Beaver Lake. He served as President of the Arkansas Cattlemen’s Association, raised money to establish their headquarters in Little Rock and funded the Jack and Janet Perry Pre-Vet and Communications Scholarship. Jack and Janet hosted many fish fries for the Cattlemen’s Association which was attended by State and local officials and enjoyed by all. Jack was also a supporter of Springdale Schools and was honored with the naming of the Springdale Schools Jack and Janet Perry Professional Development Center building. Jack was the co-founder of JV Manufacturing/Cram-A-Lot in Springdale. Jack and Janet had a vision and the wisdom to develop JV Manufacturing into one of the leading manufacturers of solid waste disposal and recycling equipment in the nation. The company currently employees 250 people. He was preceded in death by his parents; his wife, Janet Perry, and one sister, Joyce Tackett. Survivors include one son, Jeff Perry and wife Sandy of Goshen, one daughter, Jacklyn Perry Ryan and husband Max of Springdale, one stepson, Chris Weiser and wife Debby of Springdale, four grandchildren, Amber Nail and husband Jeremy of North Little Rock, Jennifer Cross and husband Michael of Best, Heather Lind and husband Jason of Springdale, and Sean Weiser and wife Danielle of Springdale, and eleven great-grandchildren. Visitation will be Wednesday, September 8, 2021, from 4 to 6 PM at Sisco Funeral Chapel in Springdale. Graveside services will be held Thursday, September 9, 2021, at 11 AM at Friendship Cemetery in Springdale. In lieu of flowers, the family is requesting donations to the Jack and Janet Perry Pre-Vet and Communications Scholarship, Arkansas Cattleman Association, 310 Executive Court Little Rock, AR 72205. Online condolences can be left at www.siscofuneral.com

Jack Denton Perry, 89, of Springdale, peacefully passed away at his home on September 2, 2021. He was born on February 16, 1932, to Ivan and Vivian Perry. Jack was a poultry farmer and lifelong cattleman, an avid hunter and fisherman, an Army... View Obituary & Service Information

The family of Jack Denton Perry created this Life Tributes page to make it easy to share your memories.

Send flowers to the Perry family.