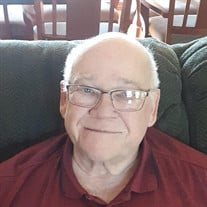 Jackie “Jack” Linn Chandler, 75, passed away on December 31, 2021 after a time of compassionate care at the Circle of Life Hospice in Springdale, Arkansas with his family by his side. He was born on August 26, 1946, in Peculiar, Missouri to the late John “Jack” and Mary (Laffoon) Chandler. Jackie graduated high school from Cassville, Missouri in 1964 where he began his career at Daisy manufacturing company located in Rogers, Arkansas. Jackie worked most of his life at Daisy as the warehouse/transportation manager leaving with 32 years of service. He continued working where he wore several hats selling real estate and managing/consulting for ETA and NYK Logistics. Outside of work he was devoted to his family where he spent time camping and coaching his son's baseball and football teams. Jackie’s favorite pastime was rooting for the Arkansas Razorbacks in all sports with his favorite being basketball where he once was interviewed by ESPN in Charlotte, North Carolina prior to the hogs winning the NCAA championship in 1994. He was also an avid bowler and golfer where he scored two hole in ones in separate tournaments. He spent Thanksgiving surrounded by the chatter and laughter of his family breaking bread together. The day after Thanksgiving, Friday morning he began his little more than month-long journey to go home to be with the angels. He was preceded in death by his parents, his brother, Danny Chandler, and his daughter, Julia Lynn Chandler. He is survived by his wife Jessica (Womack) Chandler of 53 years, his two sons, and spouses; Jason Chandler (wife, Natasha) and Jared Chandler (wife, Jenny) eight grandchildren; Joshua; Hope; Jeren; Julia; Elizabeth; Jaqlynn; Alexa; and Braxton, and numerous great grandchildren. Visitation will be Saturday, January 8, 2022 from 1 to 3pm at Sisco Funeral Chapel, at approximately 2:30 a memorial service will take place. In lieu of flowers donations can be made to Circle of Life Hospice, 901 Jones Road, Springdale, Arkansas 72764 or Alzheimer’s Association, 5506 W Walsh Ln #212, Rogers, AR 72758. Online condolences may be left at www.siscofuneral.com

The family of Jackie "Jack" Linn Chandler created this Life Tributes page to make it easy to share your memories.

Send flowers to the Chandler family.