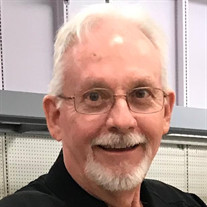 James C. Watts, 65 of Springdale passed away June 16, 2019 at Washington Regional Hospital in Fayetteville. He was born January 18, 1954 in Hammond, Indiana to James L. and Ruth Huskey Watts. James graduated from Springdale High School in 1973 and attended Bell & Howell Electronics School in Kansas City. He played football for the Central Junior High Warriors and the Springdale Bulldogs. He retired from Pepsi after working for 29 years. After his retirement he worked for D&G Sales until he retired a second time. If you knew James, then no words are needed to tell you who he was. For those that weren’t fortunate enough to have known him, he was a miracle, an angel on earth, a peacemaker. He cherished his family and the close friends he made throughout his life. He never met a stranger. If you didn’t know him, within 5 minutes you were his friend. His wife, Terri, daughter Hailey and grandson Ulrich were the loves of his life. James (Pops) was the proud grandfather of a new granddaughter, Lennon, who was born 10 hours prior to his passing. James made everyone smile. He always hoped that he’d make an impact in this world with his kindness, and he did! He was preceded in death by his father, his grandparents, Lucy Willmuth, James Watts and Hollie and Norine Huskey. Survivors include his wife and high school sweetheart, Terri Lynne Watts to whom he was married November 2, 1974; his mother, Ruth Watts, one daughter, Hailey Coester Watts and her wife Nicole; one grandson, Ulrich James, one granddaughter, Lennon Sky; one brother, Mike Watts and wife Sheila; two sisters, Linda Green and Bridget Eden and husband Howard and many nephews, aunts, uncles and cousins who loved him. Memorial services will be Saturday, June 22, 2019 at 2pm Sisco Funeral Chapel of Springdale with Pastor Kenny Eden officiating. Honorary pallbearers will be Michael Watts, Kevin Jackson, Paul Lothian, Marty Perry, Brett Nubbie, Brad Nubbie, Matt Eden, Jeff Eden, César Cavero Egűsquiza, Michael Molholt, Josh Watts and Junior Green. Online condolences may be left at www.siscofuneral.com

The family of James C Watts created this Life Tributes page to make it easy to share your memories.

Send flowers to the Watts family.