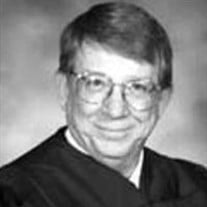 Judge Jay T. Finch, 75, Cave Springs Judge Two Birds departed this mortal plane to be with his “Wheaties,” Beth, on Memorial Day. His life started in a military pup tent in Naturita, Colorado where his family worked in uranium mines. His childhood was volatile, moving constantly, in and out of foster care and church homes. He would have graduated high school in Grants, New Mexico but walked out in protest when his English teacher singled him out for a uniquely challenging senior paper. She underestimated her talented student’s stubbornness. The Vietnam War seemed a better alternative to life as a miner, so he enlisted and served in Army intelligence from 1965-1969. The G.I. Bill made college possible for him. He earned a bachelor’s degree in Police Science and a master’s degree in Public Administration from New Mexico State. He married, became a Chief of Police, picked up the nickname “Two Birds” from a Navajo elder, and adopted his baby girl, Charlotte. Years later he met the love of his life, Beth, while their departments were investigating a homicide. In his late thirties he enrolled in Case Western Reserve University School of Law in Cleveland, Ohio. Beth returned to her career in nursing and supported him through law school and the early years of his new career as an attorney. Their first son, Lucas, was born in Cleveland. Then they moved to Texas where he passed the bar and Nathan was born. Needing to be closer to family, they moved to Beth’s family farm outside of Springdale, Arkansas. He and Beth became active members of First Baptist Church in Springdale, leading bible studies and mission trips. His growing family was complete after adopting David in 1995. Jay served Benton County as a public defender, deputy prosecutor, and circuit court judge for over twenty years. As a judge, he created the first juvenile drug treatment court in Arkansas. He was a proud supporter of the Northwest Arkansas Children’s Shelter and Court Appointed Special Advocates (CASA). Jay spent a lifetime protecting and serving the most vulnerable in our society. He found peace in the great outdoors and family dinners. Above all else, Jay loved spending time with Beth. She was his light, his motor, his compass, and his warmth. We are happy to know he has been returned to the one he loves. Jay is survived by his brothers, Tom and Bruce; sister, Becky; daughter, Charlotte Finch and partner Nico; sons, David Finch, Lucas Finch, Nathan Finch and partner Barbara, as well as a host of grandchildren and great-grandchildren. We will miss his wit and wisdom. Friends and family are invited to attend a wake for Jay on Friday, June 3rd from 5-7 p.m. at Sisco Funeral Chapel in Springdale. The memorial service will be held on Saturday, June 4th at 10 a.m. at Cross Church in Springdale, followed by a procession to White Oak Cemetery in Fayetteville for a brief burial service. In lieu of sending flowers, the family encourages donations in support of the Alzheimer's Association (www.alz.com).

The family of Judge Jay T. Finch created this Life Tributes page to make it easy to share your memories.

Send flowers to the Finch family.