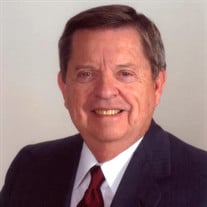 Jim Cypert, 86, passed away November 12, 2020 of COVID-19 in Fayetteville, Arkansas. He is preceded in death by his parents, Burl and Opal Cypert, brother, Carl David Cypert, and brother-in-law, Leon Gaines. He is survived by his wife, Gaye Warren Cypert, sister, Donna Kaye Gaines, daughters Julie Roblee (Dr. Rick) of Fayetteville, Jamie Kitzmiller (Michael) of Newport Beach, CA, six grandchildren, Anna George (Carl), Dr. James Roblee (Holly), Dr.Thomas Roblee, Claire Zimmerebner (Dr. Scott), Emily Kitzmiller, Caroline Kitzmiller, and four great-grandchildren, Lillian, Ella, Charlotte, and Teddy, sister-in-law, Joyce Roberts, nephews, Art and Sam Pruett. He was born May 24, 1934 to Burl and Opal Sisco Cypert in Springdale where he remained a life-long resident committed to the good of the community. He married Gaye Warren, his high school sweetheart, in 1956 and they celebrated their 64th wedding anniversary this year. He began his education at Washington Elementary on the east side of Springdale. A 1952 graduate of Springdale High School, he served as class president and enjoyed planning and attending his class reunions and get-togethers. He went on to the University of Arkansas where he graduated in 1956 with a bachelor’s degree in business and received his law degree in 1959. He was a member of Sigma Nu Fraternity. As a member of the ROTC, he was commissioned and served in the artillery and earned the rank of captain. In 1959, Jim joined Crouch, Jones, and Blair Law Firm in Downtown Springdale - later becoming senior partner and practicing for 56 years before retiring in 2015. Jim was very active throughout his life in his profession, community, and church. His fervent commitment to law began early as he was President of the Arkansas Young Lawyers in 1962. Beginning in 1976, Jim was active in the Arkansas Bar Association. He served the Bar as a member of the House of Delegates (1976-1979), Chairman (1978), Director (1980), and, eventually, President of the Bar (1981). He was honored with several awards on behalf of the Bar including the Arkansas Bar Foundation Special Award (1980) as well as the Lawyer-Citizen Award (1986). Additionally, he was chosen as a member of the Arkansas Supreme Court Committee on Specialization. Jim was a passionate member of his community and participated in many avenues of service. He was President of the Springdale Chamber of Commerce in 1966 and served on numerous organization’s Board of Directors including: Arts Center of the Ozarks, Washington County Red Cross, Springdale Kiwanis Club, Springdale United Way (Chairman), Elizabeth Richardson Center, Springdale School Board (Chairman), and Springdale Memorial Hospital. He was an avid supporter of the Susan G. Komen Ozark Affiliate. An active member of Springdale First United Methodist Church, Jim enjoyed more than 50 years as a Sunday School teacher. He was a founding member of the Schneider Sunday School, Chairman of the Administrative Board, Board of Trustees, and participated in many other Church committees. Throughout his life, Jim was honored for his service to the law and his community. He received the Jaycees Distinguished Service Award, the Chamber of Commerce Outstanding Service Award, the Cornerstone award by the Springdale Public Schools Education Foundation, the Phi Delta Theta Legal Fraternity Distinguished Service Award, the Arkansas Bar Foundation Special Service Award, and was appointed as a delegate for the 1964 Democratic Convention. Jim co-founded the American Fishing Association, which grew into a national organization focused on providing opportunities for competitive fishing and support of clean water initiatives across America. Jim was a jack-of-all-trades with a variety of interests - even deemed “the Renaissance Man” by a colleague. He enjoyed painting, travel, music, dancing, photography, reading, architecture, golf, and snow- skiing. He was famous for teaching tricks to the family dog. Additionally, he was committed whole-heartedly to spending time with his family. They enjoyed road trips in the Winnebago complete with Roger Miller 8 track music and stories around the campfire. Daughters, Jamie and Julie, were always in awe of their Daddy’s Christmas light display on Circle Drive that became a neighborhood tradition. He always lent invaluable life-lessons to his daughters. Jim (2-Daddy) taught all six grandchildren how to ride bicycles during the summer, planned and executed family vacations to many destinations, and became a master milkshake-maker, all the while passing along his words of wisdom they value to this day. During time with friends, Jim enjoyed entertaining at home, sharing travels, and cutting up over coffee and pie at a local cafe. He loved humor and loved to laugh. He lived his life in hopes of making other people’s lives better. A special thanks to Jim’s friends and caregivers, Andy King, Shella Schulze, Tom Sanders, and Shelly Telford and the staff at Butterfield Trail Village Healthcare Center and the many friends he treasured along his life journey. In lieu of flowers, a donation in Jim’s memory may be sent to the First United Methodist Church Foundation, 206 W. Johnson Springdale, Arkansas 72764 and the Springdale Public Education Foundation, 800 E. Emma Avenue Springdale, Arkansas 72764. A private interment will be held at the Springdale First United Methodist Church columbarium. A celebration of life will be held at a later date. A video tribute and a book will be available for signing at Sisco Funeral Chapel, 705 West Meadow Street, Springdale, AR. on Monday, November 16th, and Tuesday November 17th from 9-4. You may also visit www.siscofuneral.com

Jim Cypert, 86, passed away November 12, 2020 of COVID-19 in Fayetteville, Arkansas. He is preceded in death by his parents, Burl and Opal Cypert, brother, Carl David Cypert, and brother-in-law, Leon Gaines. He is survived by his wife, Gaye... View Obituary & Service Information

The family of Jim Cypert created this Life Tributes page to make it easy to share your memories.

Send flowers to the Cypert family.