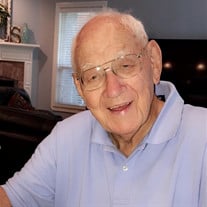 John W. Ratzki, age 88, of Lowell, Arkansas passed away Wednesday, May 22, 2019 at Circle of Life Hospice in Bentonville, AR. He was surrounded by his children and grandchildren. John was born November 13, 1930, in Chicago, Illinois, to Walter H. and Marie M. Ratzki. He was a U.S. Navy Veteran with over 5 years of service and served as an officer in the Civil Engineer Corps. During this time, he rose to the rank of Lieutenant. One of his most important military assignments was being involved in the construction of the Cubi Point, Philippines Naval Air Station. He was a graduate of the University of Illinois, with a B.S. degree in Civil Engineering. He was a Registered Professional Engineer in the State of Oklahoma, and a Life Member of the American Society of Civil Engineers. He worked for 37 years for consulting Engineering firms in Oklahoma City, Oklahoma, beginning with the Treat Engineering Company and retiring in 1995, after 28 years as a Senior Project Engineer with Grossman and Keith Professional Engineers. He moved to Lowell, Arkansas in 1996 to be near some of his children and grandchildren. John was a member of St. Raphael’s Catholic Church in Springdale. In 2007, he received the Elbert S. Graham/Elza Tucker Volunteer of the Year Award from the Rogers-Lowell Area Chamber of Commerce. He has served as the City of Lowell’s Representative on the Board of Directors of the Northwest Arkansas Conservation Authority from 2007 to 2018. John was preceded in death by his wife Jeanene L. Ratzki in 1982 and his brother Walter J. Ratzki in 1996. Survivors include his son Thomas J. Ratzki, and his wife Amy of Ballwin, Missouri, his daughter Mary E. Ratzki of Rogers, and his daughter Paula A. Shoffner and husband Charles C. Shoffner of Rogers; four grandchildren, Sara McGuff, Austin Ratzki, John Shoffner and Abigail Shoffner; two great grandchildren Roman McGuff and Caroline McGuff; his Sister-in-law, Joyce M. Ratzki and many nieces, nephews and their children. Visitation and a Vigil/Rosary service will take place at Sisco Funeral Chapel in Springdale, AR on Sunday, May 26. Visitation will begin at 5:30p.m., followed by the Vigil/Rosary Service at 7:00p.m. His funeral will be at St. Vincent de Paul Catholic Church, in Rogers, Arkansas on Monday, May 27 at 10:00 a.m. Burial will be at Resurrection Memorial Cemetery in Oklahoma City on Monday, June 3rd, at following a brief memorial service at 2pm at the Resurrection Cemetery Chapel. John will be missed by many loving family and friends. Monetary donations can be made in memory of John to any of these gracious and important organizations: Mercy Hospital Foundation, Bentonville Circle of Life or the American Heart Association. Online condolences may be left at www.siscofuneral.com

John W. Ratzki, age 88, of Lowell, Arkansas passed away Wednesday, May 22, 2019 at Circle of Life Hospice in Bentonville, AR. He was surrounded by his children and grandchildren. John was born November 13, 1930, in Chicago, Illinois, to Walter... View Obituary & Service Information

The family of John W. Ratzki created this Life Tributes page to make it easy to share your memories.

Send flowers to the Ratzki family.