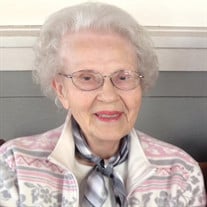 Joyce Ann Terry LeFevre, 93, of Springdale, passed away Friday, November 13, 2020 in Katy, Texas. She was born September 17, 1927, in Beaumont, Texas to George and Pearl Terry. She and her husband, Walt, settled in Springdale in 1966. There, Joyce raised four children and taught thousands more in her decades-long career as an elementary school teacher. She was a longtime member of the First United Methodist Church in Springdale and volunteered often. She was well-known for her cooking and sewing skills, and was still sewing handmade doll clothes for her great-granddaughters at age 92. Joyce was an extraordinarily loving, gracious, faithful, encouraging, caring woman. She loved her family dearly and was an absolutely stellar wife, mother, grandmother, great-grandmother, and teacher. She touched so very many lives throughout her 93 years and everybody who knew her was better for it. She will be deeply missed. She was preceded in death by her husband of 52 years, Dr. E. Walter LeFevre. She is survived by her brother, George W. Terry, Jr.; two daughters, Terry Watson and her husband, Tom, of Allen, Texas, Charmaine LeFevre Stuteville of Ft. Smith, Arkansas; two sons, George LeFevre and his wife Young Soon of Huntsville, Alabama, and John LeFevre and his wife, Angie, of Houston, Texas; plus nine grandchildren and six great-grandchildren. In lieu of flowers, a donation in Joyce LeFevre’s memory may be sent to the First United Methodist Church Foundation, 206 W. Johnson, Springdale, Arkansas 72764. A private interment will be held at Bluff Cemetery. Online condolences may be left at www.siscofuneral.com

Joyce Ann Terry LeFevre, 93, of Springdale, passed away Friday, November 13, 2020 in Katy, Texas. She was born September 17, 1927, in Beaumont, Texas to George and Pearl Terry. She and her husband, Walt, settled in Springdale in 1966. There,... View Obituary & Service Information

The family of Joyce Ann LeFevre created this Life Tributes page to make it easy to share your memories.

Send flowers to the LeFevre family.