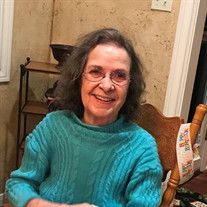 Joyce Ann Perry Tackett, 82, passed away peacefully at home from complications of Alzheimer’s Dementia on August 11 in Pinehurst, Texas, surrounded by her family. Joyce was born and raised in Springdale, Arkansas to Ivan and Vivian Perry on January 27, 1937. She was often found on horseback, and participated in many rodeo quadrilles. Joyce was Rodeo Queen of the Ozarks and Miss Ark-Okla Rodeo Sweetheart. She also represented AR at the Southwestern Expo and Fat Stock Show in Texas. She married Bill Tackett in 1961 and together they owned the B-T Ranch in Collinsville, OK, which she continued to operate on her own after Bill’s death in 2001. Their ranch was a top breeding farm for race horses. They received many top breeder awards from the OK Horse Racing Commission as well as The Blood Horse Julep Cup Award. They also raised two children, Holly Ann and Billy Ivan. Joyce was fiercely protective and deeply loyal to all who called her family or friend. Joyce spent the last four years of her life with her daughter, son- in- law and grand daughters in Pinehurst, TX. She loved watching old westerns and listening to country music and hymns. Her favorite thing to say was, “ I’m just an ol’ cowgirl.” Joyce is preceded in death by her parents, husband, and son, Billy Ivan Tackett. Joyce is survived by her brother Jack Perry of Springdale, her daughter Holly Ann Wilson and husband Hal Wilson of Pinehurst, TX. step-daughters Diana Tackett Jones and husband Bob Jones of Slaton, TX., and Patricia Tackett Sparks and husband Jerry Sparks of Gentry, and her granddaughters, Chelsea, Audrey, and Brianna Wilson, and step-grandsons Ty and Nick Moore. Funeral visitation and services will be held at 10:00 AM, Saturday, September 28, at Sisco Funeral Chapel in Springdale, AR. A private family interment will follow the service. Online condolences may be left at www.siscofuneral.com

Joyce Ann Perry Tackett, 82, passed away peacefully at home from complications of Alzheimer&#8217;s Dementia on August 11 in Pinehurst, Texas, surrounded by her family. Joyce was born and raised in Springdale, Arkansas to Ivan and Vivian... View Obituary & Service Information

The family of Joyce Ann Perry Tackett created this Life Tributes page to make it easy to share your memories.

Joyce Ann Perry Tackett, 82, passed away peacefully at home from...

Send flowers to the Tackett family.