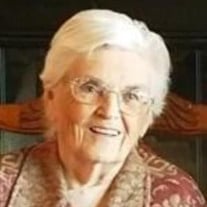 Kathryn (Williams) Graham, 90 of Rogers, passed away peacefully January 4, 2022 at Circle of Life Hospice in Bentonville, with family by her side. She was born August 8, 1931 in Shubert, Nebraska to John Wesley and Cleo (Short) Williams. Kathryn was preceded in death by Ted Graham, her husband of 43 years; both parents; and her sister and five brothers. She was a 1949 graduate of Bentonville High School. A near-lifelong Arkansan, she also lived briefly in both Idaho and Virginia. Kathryn worked variously as a bookkeeper at Wilson Mercantile and a clerk at National Fabrics for some years. She was a fantastic homemaker and willing hostess to large family gatherings, and assisted Ted with multiple working farms in Northwest Arkansas. They also loved to travel together, and managed to visit 49 states on their adventures. Kathryn taught Sunday School for over 20 years, served with both Meals-on-Wheels and Dorcas groups at various times, and played the piano at a number of churches until the age of 88. She was also gifted with the growing of plants, particularly multitudes of flowers, and nurtured two plants from Ted’s funeral over 29 years ago that are still thriving. She is survived by one son, Rod Graham of Hillsboro, Illinois; one daughter, Nancy Natividad and her husband Mike of Bella Vista; four grandchildren; six great-grandchildren; and many nieces and nephews. Funeral services will be Monday, January 31, 2022, at 10:00AM at the Sisco Funeral Chapel in Springdale, with burial to follow in Friendship Cemetery. In lieu of flowers, memorials in Kathryn’s name may also be sent to the Miller Community Cemetery Fund, care of Linda Stacy, 737 Elm Springs Rd., Springdale, AR 72762. Online condolences may be left at www.siscofuneral.com

Kathryn (Williams) Graham, 90 of Rogers, passed away peacefully January 4, 2022 at Circle of Life Hospice in Bentonville, with family by her side. She was born August 8, 1931 in Shubert, Nebraska to John Wesley and Cleo (Short) Williams. Kathryn... View Obituary & Service Information

The family of Kathryn (Williams) Graham created this Life Tributes page to make it easy to share your memories.

Send flowers to the Graham family.