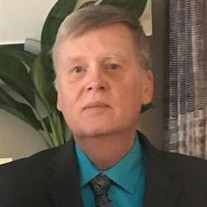 Kenneth David Houston was born on March 29, 1953, in Portland, Oregon, to the late John Kenneth Houston and Theo Ellen (King/ Grider) Houston. Kenneth graduated high school in Hutchinson, Kansas, Class of 1972. He attended 1 year at Washburn University in Topeka, Kansas, and worked for the Shawnee County Sheriff Department as a Reserve Deputy Sheriff, in Topeka, Kansas, in 1975. Kenneth served in the Air Force from 1977 - 1983 earning the rank of Sergeant. Kenneth worked as an officer for the Kansas City Missouri Police Department for 25 years; retiring in December of 2007. Kenneth married the love of his life, Deborah Parsley, on June 4, 1993. They met at the Vivion Road Church of Christ in Kansas City, Missouri. Kenneth loved animals, especially the two he left behind; his rescue dogs, Mooney and Beretta. After Kenneth retired, they moved to Broken Arrow, Oklahoma, and began worshipping at the Church of Christ at Whispering Hills. Kenneth was active and faithful in the church ever since he became a Christian and put on the Lord in baptism on January 2, 1985, at the Vivion Road Church of Christ. Survivors are his wife, Deborah of the home; his sister, Judith Avers, of Wichita, Kansas; his sister-in-law, Patricia Houston, of Preston, Kansas. Brother-in-law Jim Parsley (Laurie), Columbus, Nebraska; sister-in-law, Linda Williams, Springdale, Arkansas; sister-in-law, Barbara Parsley, also of Springdale; many nephews and nieces, and many grand nephews and nieces as well as many great-grand nephews and nieces. ******** Memorial Service on Saturday, January 8, 2022 at the Whispering Hills Church of Christ, 21349 E. 111th St. S. Broken Arrow, Oklahoma, at 1:00 pm ********Visitation on Monday, January 10th at Sisco Funeral Chapel in Springdale, Arkansas at 10:30-12:30 *********Graveside service at 1:30 pm Fayetteville National Cemetery, 1000 S. Lt. Col LeRoy Pond Avenue, Fayetteville, Arkansas. In lieu of flowers, Kenneth would like a contribution made to: Truth for Today World Mission School c/o Eddie Cloer 2209 South Benton Searcy, Arkansas 72145 The family would like to thank all of you who have supported them through Kenneth's health struggles these last 3 years, be it church family, friends near and far and the medical professionals who cared for him. We thank you!

The family of Kenneth David Houston created this Life Tributes page to make it easy to share your memories.

Send flowers to the Houston family.