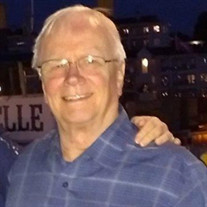 Kirk A. Seifert, 81 of Fayetteville passed away Wednesday, November 24, 2021 at Circle of Life Hospice in Springdale. He was born September 13, 1940 in Sioux City, Iowa to Emil and Blanche Kirk Seifert. After growing up in his father's Ben Franklin store in South Dakota, Kirk spent many years managing large retail stores in California. During this time he also owned and operated a dirt bike store and rode in or sponsored many races in the deserts of Mexico and California. He married and had four beautiful children with his first wife while living mostly in California. Before and after managing big box stores Kirk had many other jobs including working on a fishing boat, working for a tourist railroad in the Redwoods of Felton, CA, owned and operated a plastics business in Santa Cruz creating resin cast souvenirs, owned a yard maintenance business, did silk screening on T-shirts. He went to the Southern California School of Massage and became a licensed massage therapist and later completed the Joseph Stephenson Creative Healing courses to become a Creative Healer. After moving to Florida in 1988 he met the love of his life, Judy who he married in 1989. He worked at a local restaurant as a cook. At that restaurant, he met his next employer for whom he created a sophisticated database for ordering food to use for that restaurant's ordering, inventory and calculating food cost. In 1992 he and Judy started an adventure to live in Arkansas, spending summers there and winters in Florida. They moved to Arkansas to live full time in the fall of 2001. While in Arkansas he continued his journey to learn and try new things. He was an engineer on the dining train in Eureka Springs for a couple summers. He used the database he created when he went to work for Local Flavor Cafe in Eureka Springs where he did many jobs including bookkeeping and payroll. He continued his learning to build their dream home in their little piece of paradise in the woods of southern Madison County, AR. He learned not just the building but the electric and plumbing as well. He finished the home in 2008 where they lived for many years enjoying the beautiful surroundings and wildlife. In 2010 he became an Amateur Radio Operator and took the call sign W5KRK. Being a Ham was one of his greatest joys where he met so many people who remained friends through the years. He and fellow Hams started the Hogville Hams Amateur Radio Club in 2013. The club focused on holding licensing classes and teaching new Hams the many different skills needed in the hobby. Kirk never met a stranger, loved talking to people and loved his life. He is preceded in death by one sister, Mary Ann. Survivors include his wife, Judy Seifert of the home; four sons, Tom McCumber of France, Scott Seifert of Colorado, Mark Seifert of California and Glenn Seifert of Nevada; one daughter, Kristin DiCarlo of California; seven grandchildren and one great grandchild. A memorial service will be held at a later date. Online condolences may be left at www.siscofuneral.com

Kirk A. Seifert, 81 of Fayetteville passed away Wednesday, November 24, 2021 at Circle of Life Hospice in Springdale. He was born September 13, 1940 in Sioux City, Iowa to Emil and Blanche Kirk Seifert. After growing up in his father's Ben... View Obituary & Service Information

The family of Kirk A. Seifert created this Life Tributes page to make it easy to share your memories.

Kirk A. Seifert, 81 of Fayetteville passed away Wednesday, November...

Send flowers to the Seifert family.