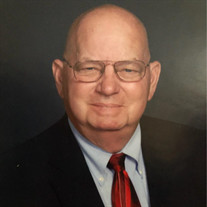 Larry Bob Fuller, 80, of Springdale, AR, died June 6, 2021, at Circle of Life Hospice. He was born April 5, 1941 at home in a log cabin out of Van Buren, AR, when his mother sent his 2 year old brother Don to the dairy barn to get his dad. He was a Christian, an ordained minister and a longtime member of Calvary Baptist Church in Springdale. Larry graduated from Springdale High School in the Class of 1959. He was very active in football, track, “S” Club, Key Club, Boys State District Conventions and the entertainment arts, being on the Play Production staff. Larry rode in the Springdale Quadrille and loved animals of all kinds. He was a truck driver for Wal-Mart and after retiring owned and operated Fuller’s Store Fixtures and Shelving for over 20 years. He retired again at the age of 76 and spent his remaining years at home, enjoying time spent with his family. He loved to cook, fish, camp, and watch all sports, being a lifelong Razorback fan. Larry was preceded in death by one son, Justin Wade Fuller, three daughters, Tina Louise Fuller, Belinda Marshall, Scharel Worley and his wife of 39 years, Mary Fuller. He is survived by two daughters, Denise Fuller and Wanda Beach, both of Springdale and two sons, Buck Fuller of Galveston, TX and Doug Weaver of Blytheville, AR. He has many grandchildren and great grandchildren who he loved dearly. He started doing “Grandpa School” with his great granddaughter Leah Fuller, when the Covid 19 Pandemic shut schools down. They enjoyed many days together and he spent his last year with Leah and Danny, who took good care of him daily. Pallbearers will be Jonathan Cole, Dan Fuller Jr, Brandon Chandler, Doug Beach, Paul Artman, and Marcus Fierro. Honorary Pallbearers will be Chris Marshall, Jeremy Marshall, Frank Beach, Doug Weaver, Buck Fuller, and Ty Fuller. Visitation will be Wednesday, June 9, 2021 from 5 to 7 PM at Sisco Funeral Chapel in Springdale. Funeral services will be Thursday, June 10, at 10 AM at Calvary Baptist Church on Gutensohn in Springdale with burial at Zion Cemetery following the service. Monetary memorials on behalf of Larry Fuller may be made to Circle of Life Hospice, 901 Jones Rd, Springdale, AR 72764.

Larry Bob Fuller, 80, of Springdale, AR, died June 6, 2021, at Circle of Life Hospice. He was born April 5, 1941 at home in a log cabin out of Van Buren, AR, when his mother sent his 2 year old brother Don to the dairy barn to get his dad.... View Obituary & Service Information

The family of Larry Bob Fuller created this Life Tributes page to make it easy to share your memories.

Send flowers to the Fuller family.