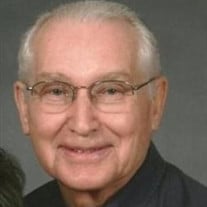 Loyd Donald “Don” Reynolds, 91 died Saturday, February 27, 2021 at Circle of Life Hospice in Springdale. He was born December 1, 1929 in Springdale to Cleve and Louise (Graham) Reynolds. He was a lifelong resident of Springdale. He graduated from Springdale High and enlisted in the United States Army in 1948, serving one year and then seven years in the Army Reserves. He worked as a Pressman for the Springdale News and later operated his own business, Mark II Builders, a residential construction company. He was a Razorback fan and supported all Springdale sports. He served as president of the Babe Ruth and American Legion baseball programs. He was a Rotarian and a Paul Harris Fellow. He retired in 1995 and began volunteering at his grandchildren's schools, the Shiloh Museum, the Jones Center and First Presbyterian Church in Springdale. He was preceded in death by his first wife, Bernice (James) Reynolds, his parents, his step-father, Cecil Lewis and his half-brother, Dennis. Survivors include his wife, Kay (Stanberry) Reynolds, his children, Chip (Cheryl), Marty (Carin), Steve Stanberry and Staci Mains. He shared his life with his grandchildren and great-grandchildren Brandy, Bradley (Austin), Brody, Jacob and Kennedy Reynolds, Jordyn (Heather) and Jensyn Stanberry and Maci and Cameron Mains. A private memorial service will be Thursday, March 4, 2021 at 11 am at First Presbyterian Church Columbarium with Pastor Kade Curry officiating. The family will receive friends following the service from 1-2pm at the church. In lieu of flowers, memorials may be made to First Presbyterian Church, 100 S. Gutensohn Road, Springdale, Arkansas 72762 Online condolences may be left at www.siscofuneral.com

Loyd Donald &#8220;Don&#8221; Reynolds, 91 died Saturday, February 27, 2021 at Circle of Life Hospice in Springdale. He was born December 1, 1929 in Springdale to Cleve and Louise (Graham) Reynolds. He was a lifelong resident of Springdale. He... View Obituary & Service Information

The family of Loyd Donald "Don" Reynolds created this Life Tributes page to make it easy to share your memories.

Send flowers to the Reynolds family.