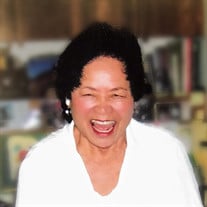 Lucille L. “Conjie” Williams, passed away peacefully on June 2, 2019 in Springdale Arkansas. She was born January 1st, 1930 in Waimanalo Hawaii. Conjie was preceded in death by her husband James D. Williams, her parents Anthony Conjugacion and Lucille Pante, and her brothers Melvin J. Conjugacion and Anthony Conjugacion Jr. She was survived by her sister Laurie Walser, her children Marlea L. Mesta and Dr. James A. Williams and his wife Patricia Williams and granddaughter Marlea Maschmeyer and her husband Thomas Maschmeyer III and great grandson William Maschmeyer. Lucille Leinani was born at home, delivered by midwife on the Waimanalo Sugar Plantation on Oahu, where her father was the electrical engineer and manager. She learned Hula at an early age as is common for children of Hawaii. Many of you may remember her giving Hula shows at various events and elementary schools. She used to wake up her children sometimes pounding the gourd and singing Hawaiian chants. Yes, she had a great sense of humor. Conjie always embodied the beauty of Hawaii and the beautiful Aloha Spirit. You felt it when you were around her or talking to her, so much love coming from her. No one was a stranger to her. We will all miss her. Lucille was in Hawaii as a young girl during the bombing of Pearl Harbor. She experienced the fear and panic that many others felt at the time. It was an event that helped build her character, strength, and courage. Lucille won a scholarship which she used to attend Kansas State Teacher’s College in Pittsburgh Kansas where she met and married James D. Williams. She actually passed away on the date of their anniversary. She became a Physical Education teacher and Jim pursued turkey ranching. The poultry business brought them to Springdale.. Evidence of being involved in her community started at an early age. In her youth she was Class President of Sacred Hearts Academy three years in a row and Assistant Program Director of the YWCA in the Education Department where she taught swimming. Conjie was very involved in the Springdale Community. She was a Cub Scout Den Mother, they call them Den Leaders now. She was a winner in the Chicken Cookin Contest with her dish “Bird of Paradise”. She was a member of Beta Sigma Phi, Springdale Garden Club, PEO, Committee of 100, and on the Board of the Springdale Public Library. She was known to decorate many friends’ homes during the Holidays. She was a Breast Cancer survivor and volunteered many years for “Race for the Cure”. Conjie loved gardening and working with ﬂowers. This would eventually evolve into Jim Williams Greenhouse and Nursery on Johnson Rd. which later moved to Shady Grove Rd. She was also part owner of an interior design business, Designer’s Touch. Many of you know that Conjie was passionate about golf. She was an avid golfer and was a long time member of Springdale Country Club and Bella Vista where she won Club Net Championship. She and her friends traveled all over the States to golf. She really loved it! Conjie was raised Catholic and in her later years attended services at Saint Raphael. She was known to attend a few Methodist services with her friends as well. A mass will be said honoring her at Saint Raphael, Monday June 10th. The family wishes to thank all her friends who have been so supportive in these trying times. We wish to thank the staﬀ at Windcrest Health and Rehab for taking care of her over the past six years. We are very thankful to Circle of Life Earlene Howard Hospice for making her ﬁnal journey to God comfortable and painless. Words are not enough to show our appreciation. The family will hold a private vigil in her honor. Memorial donations are asked to be given in honor of Lucille Williams to Circle of Life Hospice care. You may donate online at nwacircleoﬂife.com or mail a donation to Circle of Life, 901 Jones Road, Springdale Arkansas 72762. Online condolences may be left at www.siscofuneral.com

The family of Lucille L. "Conjie" Williams created this Life Tributes page to make it easy to share your memories.

Send flowers to the Williams family.