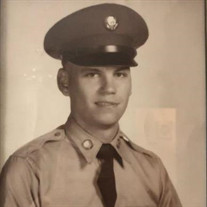 Marion Eugene “Gene” Watson, 78 of Springdale passed away Thursday, April 18, 2019 at Circle of Life Hospice in Springdale. He was born April 22, 1940 in Scott, Arkansas to Byron A. and Lillie Price Watson. Gene served in the United States Army and was a Retired Police Officer. He was an avid sports fan who followed the Razorbacks. He enjoyed the outdoors, traveling, spending time with his family, his dog, and his many friends. He was a Deacon at Pinecroft Baptist Church in Shreveport, Louisiana where he was involved in the bus ministry. He was a devoted husband, father and grandfather. He was a very funny and witty man. The family would like to give special thanks to all of his physicians and staff at Washington Regional Medical Center, Earlene Howard Circle of Life Hospice, Northwest Medical Center and in Shreveport, Louisiana along with his fellow police officers and co-workers in Louisiana who took such great care of him. He was preceded in death by his wife, Nelwyn June “Nell” Watson, two sisters and four brothers. Survivors include one son, Jacob Watson of Texas; three daughters, Lisa Ford and husband Johnny of Springdale, Kelley Elam and husband James of Gravette and Shelly Wilson of Springdale; two brothers, Dwight Watson of Conway and Dennis Watson and wife Pat of Louisiana; three sisters, Polly Stevenson of Springdale, Jewel Johnson of Louisiana and Virginia Cash and husband Walter of Alabama; and four grandchildren, Murle Elam, Walter Elam, Hunter Wilson, Sarah Elam and several nieces and nephews. Funeral services will be Tuesday, April 23, 2019 at 1:00 P.M. at Sisco Funeral Chapel of Springdale with Rev. Paul Payne officiating. Burial will follow in Zion Cemetery. Visitation will be Monday from 5 to 7pm at the funeral home. Memorials may be made to Circle of Life Hospice, 901 Jones Road, Springdale, Arkansas or the American Heart Association, 108 E. Sunbridge Drive, Fayetteville, Arkansas 72703. Online condolences may be left at www.siscofuneral.com

The family of Marion Eugene "Gene" Watson created this Life Tributes page to make it easy to share your memories.

Send flowers to the Watson family.