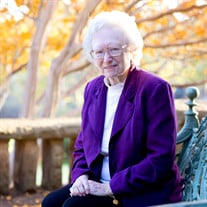 Marjorie Jean Johnson, 91 of Broken Arrow, Oklahoma formerly of Springdale passed away Sunday, April 14, 2019 in Tulsa, Oklahoma. She was born December 24, 1927 in Spring Valley, Arkansas to Theo William and Alice Sue Cook Johnson. Marjorie worked at Campbell & Bell on the Square in Fayetteville her senior year in High School and for a couple of years after Graduation until she got a job in 1956 for Standard Oil Company in Tulsa. Then merged into Amoco. Marjorie retired in 1986 with Amoco Oil now known as BP Oil. Marjorie fought a brave battle with dementia after her older sister passed away in 2009. She lived with her cousin, Ron Parsley and his wife Barbara, her primary caregiver until Ron became ill in October of 2016. Then Marjorie lived with her other cousin and caregiver, Deborah Houston and her husband Kenneth, in their home in Broken Arrow, Oklahoma until her death. Marjorie had a wonderful positive attitude and a fantastic sense of humor during her transition in her memory loss issues. However, the entire Parsley family were a wonderful team in “remembering for her”. She is now at peace. She was preceded in death by her parents and one sister, Theola Fayne Johnson. Survivors include four cousins, Bill Fitch of Enid, Oklahoma, James Parsley and wife Laurie of Columbus, Nebraska, Linda Williams and husband Ivan “Speedy” of Springdale and Deborah Houston and husband Kenneth of Broken Arrow, Oklahoma. Funeral services will be Wednesday, April 17, 2019 at 11:00 a.m. at Sisco Funeral Chapel with Larry Culbreath officiating. Burial will follow in Friendship Cemetery. Visitation will be at 10am at the funeral home. In lieu of flowers: Gospel Tracts International , c/o Robert Dockery, Church of Christ, 4377 East Huntsville, Fayetteville, AR 72701 Or Truth for Today World Mission School c/o Eddie Cloer, 2209 S. Benton, Searcy, AR 72145. Online condolences may be left at www.siscofuneral.com

The family of Marjorie Jean Johnson created this Life Tributes page to make it easy to share your memories.