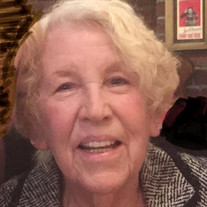 Born Marjorie Louise Raveling March 29, 1937, passed June 18, 2020, Marjorie L. Johnson was born on March 29, 1937 in South Dakota to Emil and Phyllis Raveling, the middle of 5 girls (in age order Betty Widener, dec’d 2015, Myrna Hart, dec’d 2016, Marjorie Johnson, Della Swigart, dec’d 2018, and Loretta (Retta) Johnson). The Raveling family lived in Iowa during her childhood, where they lived near and helped on her grandparent’s farm. In the early 1950’s the Raveling family moved to Troy, Ohio where Emil taught science and math at Troy High School..and they also ran the small fruit and vegetable farm every summer on the farm where they lived next door to the school where Phyllis eventually taught second grade. Marj married and due to the Air Force moved to stations in Texas and South Carolina, where their first child Nancy Johnson was born. They moved back to Ohio after Ralph’s discharge where Marj had their second and last child Larry Wayne Johnson. Marj was a single mother and worked full time at the office of David M. Spencer, M.D. and raised Nancy and Larry in Troy, Ohio, while handling the resident nursing duties as well as being the office manager for Dr. Spencer and his patients. She loved roller skating when she was younger and was quite good! As the kids grew and moved to Indiana and then on to the Chicago area as adults, Marj followed them to Chicago in 1987 when her first grandchild (Danielle Elise Johnson) was born. She never went back to Ohio once her grandchildren were born except for visits, and settled into her own place behind the Johnson family house in Saint Charles, IL. There she would help raise both granddaughters (Katelyn Marie Johnson was born in 1990). She was involved in their lives every single day and had such a positive influence on them..attending Dani’s plays, musicals and choir concerts (Dani is still an accomplished vocalist and teaches music to autistic children in Fort Collins, CO) and Katie’s athletic, equestrian and most all school events all the way thru college. She took great joy in working with the family on their alpaca farm as the girls grew and became the confidant that both teenage girls needed as they grew into young ladies. She loved shopping (only for bargains..she never paid full price for anything!) She also started one of the best family traditions for the five sisters..they would get together every single year for a Christmas Sister’s gathering! This went on for decades, until recent times when age and difficulty traveling slowed this tradition. She stayed on the alpaca farm until she moved to be closer to Nancy in Arkansas in 2016, where she stayed in two different assisted living facilities until we brought her home to be with us three days before she passed on. Due to the Covid-19 lockdown, she had been kept from our hugs and close visits for the past three months, so the decision was made by Nancy to bring her home for the remaining time she had left.. where she passed peacefully on the evening of June 18, 2020 surrounded by Nancy, Larry and Mark (her awesome son in law). We will plan a celebration of her life in the future..and will announce it when plans are made. Marj was a cancer survivor and if anyone is so inclined..feel free to make a donation in her memory to The H Foundation, a Charity that focuses all of it’s efforts on basic cancer research and cures thru The Lurie Cancer Center at Northwestern Memorial Hospital, a charity that she was close to.. https://www.hfoundation.org/donate-now

The family of Marjorie L. Johnson created this Life Tributes page to make it easy to share your memories.