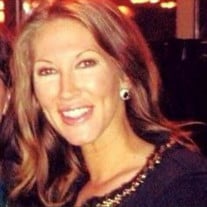 Melissa Armstrong Wann Murphy of Fayetteville, Arkansas passed away on February 15,2021. She was born April 30, 1980 in Atlanta, Georgia. Melissa graduated from Rocky Mountain Academy in Bonners Ferry, Idaho, in 1998, and attended The College of Charleston and the University of Arkansas. She is predeceased by her father, Guy Mark Wann, and survived by her husband, Liam Murphy, and their three children, Caitlin, Connor and Alex. She is also survived by her mother, Martha Wann Springfield (Steve) and her sister, Elizabeth Ward Creel (Robert). Melissa was a shining light to so many people with her outgoing and vivacious personality. She never met a stranger. She lived life to the fullest and enjoyed so many things life had to offer, such as owning a gift shop (The Copper Pig), attending concerts, traveling, spending time with friends and family as well as her dog, Major. Melissa had a big heart and did so much for other people. She will be greatly missed. Her greatest love was her boys. A Memorial Service will be held to celebrate her life on Tuesday, February 23, 2021 at 1:00 p.m. in Springdale, Arkansas at the First United Methodist Church located at 206 West Johnson Avenue. The Memorial Service will also be streamed live at https://youtu.be/spshoKyaP2E. In lieu of flowers, memorials can be made to First United Methodist Church, 206 West Johnson Avenue, Springdale, Arkansas, 72764 or the charity of your choice. Online condolences may be left at www.siscofuneral.com

The family of Melissa Armstrong Wann Murphy created this Life Tributes page to make it easy to share your memories.

Send flowers to the Murphy family.