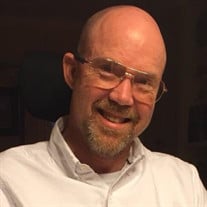 Michael (Mike) William Sylvester 10/31/1960 – 02/16-2021 Husband of Beth; Father of Erin, Dylan and Bailey; Father-in-law to Thomas; Brother to Rick, Paul, Eric, Chris and Lance; Son to Pat and Pete; Brother-in-Law to Michele, Jim, Kevin, Lisa, Donna, David, Gina, Mark, Tony, Stephanie, Linda, Kimberly and Laura; Uncle to 22 beloved nieces and nephews. Mike was diagnosed with Juvenile diabetes at the age of 2 ½ years. His parents were told he probably wouldn’t live to graduate high school, but as Mike always had a way of doing, he surpassed expectations and proved people incorrect. He came close to death on numerous occasions, but God had a plan for him and that plan was for him to bless others on this earth. He was one of the smartest people you would ever meet and he was called to share his knowledge with others. It was his gift; his calling. He never stopped learning and he never stopped educating others. He taught students from kindergarten to college, people in waiting rooms and passers-by, really anyone else who would listen to him. Mike worked at aquariums and zoos and he loved all animals. He always had animals in his classrooms, from all kinds of birds, to turtles, snakes, sugar gliders (small flying squirrels), an escaping octopus, an eel, and beautiful salt water fish and invertebrates such as starfish, coral and sea anemones. He had the honor of meeting Jacques Cousteau as well as Senator John Glenn and his wife. He was a competitive sailor and loved being out on the water. He received both his Bachelor’s and Master’s degrees from Tulane University and he spent some of the best years of his life in New Orleans. Mike always said that he and his buddy Orlando “never let their classes get in the way of their education.” He had a deep love for music and while never much for dancing, he felt the music deeply—always contemplative of the meaning of songs and the story or experience behind the lyrics. He didn’t just listen to the Neville Brothers, Dr. John, and Jimmy Buffet…he knew them and stories behind their music and how those stories carried lessons for us, if only we listened to truly hear them. Mike was sinfully proud of his children, Erin and Dylan, and he was so excited about becoming a grandfather. When we knew he was going to have to go to heaven before the baby was born, Beth told him he needed to watch over Erin, Dylan and their babies. Mike was barely conscious but he heard her, responding loud and clear, “I’ll do anything.” Mike had such an incredible sense of humor—from groan-worthy puns to intellectually complex zings, he brought laughter and a lighthearted approach to life wherever he went. If you were lucky, you knew that you were headed into a joke before the punch line actually came out. Mike was also a talented artist with a flare for cartooning and photography. He was fascinated with the physical world and the beauty of nature. Beyond always being willing to share an obscure fact about the world, or a joke to bring a smile, Mike was truly one of those people who made a real difference in the lives of others. He shared the gifts of wonder and magic, of music and New Orleans, of sailing, science, and animals with so many students, friends, and yes—even with strangers. He gave these gifts of loving learning to so many who now go on to share their gifts and talents with others.

The family of Michael (Mike) William Sylvester created this Life Tributes page to make it easy to share your memories.

Send flowers to the Sylvester family.